You are here: Home / Community Profile / A Legacy of Giving Back 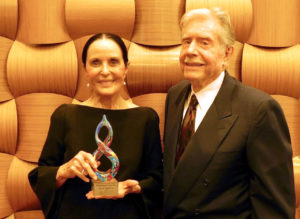 Learning that Jim and Linda Lee had been named the 2019 Philanthropists of the Year by the Arizona Community Foundation of Yavapai County was not a big surprise to those who have lived in the Quad Cities area for any length of time.

For decades, the Lees have been major contributors to a diverse number of groups, organizations and individuals who benefit the greater region and, in some cases, the state.
At the same time, the Lees have never sought honors or recognition for what they do as they quietly provide support to the performing arts, schools, health care and medical organizations, social agencies and many others. This has been their nature ever since they arrived in Prescott in 1977, and began developing real estate and commercial development projects. Among projects were the Ponderosa Mall, the Ranch at Prescott, Prescott Gateway Mall, the Walmart Super Center and Touchmark at the Ranch.
When they were announced as “Philanthropists of the Year” during a formal luncheon at the Prescott Resort, Aug. 9, the crowd responded with a standing ovation.

The 2018 Philanthropist of the Year, Mike Fann, founder-owner of Fann Contracting, introduced the Lees as “lovers of humanity and the community.”

Although they grew up only a few miles apart in Texas, Jim and Linda never knew each other until years later when they traveled almost 6,000 miles and were both working in Russia. Linda, who holds degrees in English and history from the University of Texas, was teaching in Russia. Jim, who received an honorable discharge from the U.S. Navy following his service near the end of World War II in China, had returned to Arizona and enrolled in Phoenix College. Later, he accepted a consulting position with People to People in Russia.
What brought them together in that far-away country was opera, classical music and the arts.

“We both love great music,” said Linda. “That’s how we met. We both so enjoyed it that we’ve traveled back to the Bolshoi Ballet many times. We’ve also been to the Kirov Ballet in St. Petersburg. In fact, we’ve probably been to every great music hall in Western Europe.”
Jim agreed. “And, we love Santa Fe and the Santa Fe Opera. We have this vision that Prescott can equal Santa Fe in being a nationally recognized center for music and the arts. Prescott and this area have so much talent.”

The couple cites the Prescott POPS Symphony Orchestra as just one talented homegrown organization. They especially praise the Prescott POPS for its sponsorship of the annual Music Memory project that brings third through fifth graders from throughout the county to hear classical music at the Yavapai College Performing Arts Center.
They also are involved in supporting Dennis Houser, who directs the Prescott Chorale; they contribute to the Yavapai Symphony Association; they help the public schools and their music programs; they are longtime advocates for Prescott Friends of Arizona Opera; and the various musical and artistic programs offered through Yavapai College have their support.

Jim explained, “When we moved here in the late 1970s, we knew Prescott would be our home. We also knew it would grow and become a major cultural influence in Central Arizona. We made a conscious decision to support such aesthetic programs.”

Linda agreed. “It’s mind-boggling, the amount of talent that we enjoy. We want to encourage it as much as we can.”

Beyond the arts, they are vocal advocates for quality educational experiences as well, such as the Jim and Linda Lee Planetarium atop the STEM Building on the Embry-Riddle Aeronautical University (ERAU) campus. They wanted to create awareness about ERAU throughout the rural areas of Central and Northern Arizona, so they proposed the construction of the 47-foot diameter domed planetarium.

“Planetarium enthusiasts often have young children. We wanted these youngsters in our part of the state to be able to experience a unique learning experience,” Jim said.

“In just the 20 months since the planetarium opened in January 2018, almost 35,000 people have participated in their programs. That’s not just local people,” said Linda. “Data show that visitors are from throughout the U.S. and several foreign countries.”

They both agree that Prescott has become a desirable cultural, artistic and educational hub that well deserves the reputation as one of the most livable communities in the United States.

What is your favorite pastime?

Jim: “Anything involving classical music and opera.”
Linda: “Especially if it is something by Verdi.”

What makes you smile?

Linda: “Seeing these children from rural areas enjoy musical and artistic experiences like those provided by the Music Memory Program, which the Prescott POPS sponsors every February.”

You endowed a program at the University of Arizona College of Medicine several years ago. What was the reason behind that decision?

Linda: “We believe in quality healthcare programs, so we established the Jim and Linda Lee Memorial Endowment for Cardiovascular Disease there.”

Jim: “The Sarver Heart Center founded at the UofA Medical Center is now recognized as one of the world’s leading cardiovascular research institutions.”

Why did you choose Prescott as your home?

Jim: “When we first moved here from the Valley more than 40 years ago, we left evaporative coolers and oppressive heat. We told people we were moving to Prescott, for that’s where heaven was.”