You are here: Home / Business / A Match Made for Hollywood 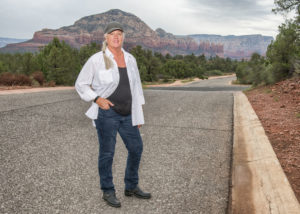 Making movies and commercials is not for the physically or mentally weak, says Sedona-based freelance production manager, producer and assistant director Margaret Knight.

“Every job is different,” said Knight. “The film business is a formula, and when the formula works, it flows – and it’s a great sensation to be a part of it. As in anything, when you feel the energy and synchronicity, it gives you a satisfying, rewarding, why-you-do-this-for-a-living kind of feeling.”

Once Knight is hired, she hits the ground running, procuring a production team and putting together plans, troubleshooting and anticipating challenges.

“Be it a commercial or major feature movie, as soon as I know the location, I begin working on logistics. I have to make sure everything comes together, renting equipment, lodging, meals, sometimes casting, working with local authorities and, most importantly, keeping on budget.”

Other masterminding includes parking, traffic control, permits, transportation, lodging and working with the police or fire department, Forest Service or National Park Service for impact statements. “Every job is different and I have to know the right approach for outfitting during the entire production. It’s also important to protect the land and be good stewards.”

Knight has lived in Sedona for 31 years and has done freelance production since she arrived. “I’ve made a good living and carved out a career based on what I’ve learned through the years.”

Appearing more like a movie than her biography, Knight was born in the rural town of Effingham, Illinois and earned a degree in radio and television broadcasting from Southern Illinois University (SIU). She waited tables for a few years then moved to Denver, where she explored scuba diving.

“I was then introduced to a marine institute in the Florida Keys where I worked for a summer and got hooked on boats and diving. I went to seamanship school and learned a lot about navigation and seamanship. I then moved to Louisiana and applied at 80 places and no one would hire me. Finally, a port captain hired me and I worked as a merchant marine for four years and finally garnered enough sea time to sit for my Captain’s license with the Coast Guard.”

Her seamanship skills came in handy for many jobs on Lake Powell. “I’ve done a lot of work on the water here and at times have worked on films as marine coordinator.” She says Arizona has more boats per capita than any state in the country.

“Margaret is a very highly organized production manager on whatever job she is doing,” said Locations Southwest Owner PJ Connolly. “She has seen it all, thinks it all out way in advance and she wears many hats. She has a great personality and she is very strong and takes charge of coordination on set, making sure safety and logistics run smoothly.”

Knight met her husband, Robin, on the set of a movie in Nashville, Tennessee. They have two grown children.

One of her favorite celebrities is Dolly Parton, whom she met on the set in Nashville. She says she “was fun to work with and has a charming personality.” Another favorite is William Shatner of Star Trek fame, with whom she worked on two projects. “He did all his own stunts, which was impressive, and he brought his own wardrobe. He was very refreshing and so delightful. I love working with folks that have a sense of commonality. Plus, he’s a great performer.”

For several years, Knight has produced a number of spots for the Oakland A’s baseball team, which travels to Phoenix for Spring Training. She has also produced several commercials in Flagstaff. “Because of the high altitude, a lot of sport companies like Nike and Adidas have selected this area. Automobile companies like Kia enjoy the terrain, as well as Asian and European companies.”

She says she loves working outdoors. “Since high school, I never wanted to work at a desk or indoors, so I’m blessed to have found something that fits my lifestyle and keeps my brain sharp.” QCBN