You are here: Home / Education / Advocating for Women in Aviation 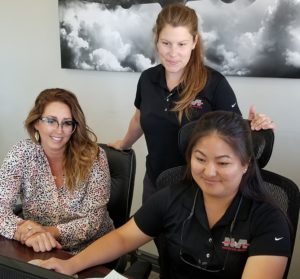 Grit, determination and a passion for aviation fuel the soaring careers of two area women who have achieved top industry jobs and professional accolades. Training, job searching, advancing and prospering in the aviation industry are skills they eagerly share with others.

“A career in aviation doesn’t just mean ‘pilot,’” Mintzmyer said. “It is a multi-dimensional,   continually expanding industry. No matter what your background is, if you have a passion for aviation, now is the time to pursue your career goals. People entering into the aviation field should look for jobs with growth potential and work hard at achieving their goals.”

Women in aviation could receive a boost from the new Women in Aviation Advisory Board (WIAAB) under the Federal Aviation Administration. Thirty women were selected to the board in 2019 from nearly 200 applicants representing universities, airlines, airports and aviation groups. The board has been given a two-year window to develop an action plan.

“As women constitute roughly one-half of the nation’s workforce, removing barriers and supporting equal opportunity for all is an important endeavor,” she said.

Mintzmyer was equally enthusiastic. “Having a board to support and encourage women with   aviation interests is wonderful. Recruiting, supporting and inspiring people [remains] a vital component in keeping our aviation community thriving. Industry leaders need to encourage women to advance within their career fields, attend additional training, provide appropriate resources, be positive and be a productive role model.”

“Mentoring is an important part of the success of future generations,” Sobotta said. “It can be initiated by both men and women. Employers can truly benefit from supporting outreach and mentoring through their employees, including manager participation in university networking roundtables and establishing job shadowing and internship programs.”

Sobotta, an Accredited Airport Executive (AAE) with 17 years of experience at four commercial service airports and two general aviation airports, also has logged extensive academic expertise, co-authored a book, and been lauded nationally for her work. Before overseeing the expansion of the Prescott airport, she was the School of Business Founding Chair at Embry-Riddle Aeronautical University (ERAU). Sobotta has worked with NASA as a business/technical consultant, served on the Arizona Aerospace and Defense Commission, and contributed to four Airport Research Project panels on airport terminal design, common use passenger processing systems, and airport social media use.

Named both Prescott Area Leadership (PAL) Woman of the Year and AAE Airport Executive of the Year in 2019, Sobotta earned her Ph.D. in public administration from Arizona State University and an MBA in Aviation from ERAU.

Mintzmyer, whose hometown is Calgary, Alberta, Canada, has been general manager at North-Aire Aviation since 2018. She started as an operations controller and moved her way up. The 36-year-old specializes in student services with flight partners Yavapai College, the Student and Exchange Visitor Information System (SEVIS) and the Transportation Security Administration (TSA). She promotes aviation opportunities for youth, along with directing North-Aire Aviation’s marketing and operations.

Mintzmyer plans to earn a master’s degree, following her advice to future pilots: “Never give up on your goals; there is always a stone left unturned somewhere. Being a military wife and a mother to four children has played a huge role in how I approach obstacles. It doesn’t get easier. You just get stronger.”

Her main obstacle, Mintzmyer said, has been “to embrace and encompass all of the (federal) and Yavapai College knowledge through the years. Every government department affiliated with aviation is always updating and changing. Once you think you have mastered the craft, you are met with a program change. The aviation business is a wonderful field if you are up for an exciting challenge.”

Sobotta entered aviation in the 1980s, “when there were many challenges for women. While being in an airport career at age 23 was exciting, it was also discouraging at times. Back then, workers were unaccustomed to sharing their workspace with non-traditional employees, including women. Experiencing occasional discrimination was hurtful, but I persevered, and now have a wonderful career. It is rewarding to help Prescott Regional Airport grow and see passengers enjoying our improved airline service. I truly appreciate all those who have helped me to grow in this career throughout the years.”

Sobotta acquired an early fascination with aviation, nurtured by her parents, from observing planes through a perimeter fence. Mintzmyer was completing a sociology degree in her mid-20s, while her husband earned flight certifications from North-Aire. A front office position opened up, and she chose a change of pace.

Mintzmyer credits her husband, co-workers and government personnel with encouraging, mentoring and motivating her through the learning curves and advancement.

Sobotta said she appreciated assistance from fellow airport employees while earning her Accredited Airport Executive (AAE) in 1992, when only 22 women in the country had achieved that status. She cited “truly transformational” internship opportunities and mentioned her most important early mentor, Laurence Gesell.

Gesell had selected her from more than 70 candidates to serve at Oceano County Airport in California. “He helped me launch my career and we have been friends ever since. We eventually co-authored a book, ‘The Administration of Public Airports.’”

Sobotta has seen many former university students find their own rewarding careers with airlines, airports, aerospace and defense, and related fields. She has helped men and women gain internships and entry-level positions within the industry. Many have reached out for advice or to share stories.

Mintzmyer said that she mentors and encourages all of her students and employees the same. However, she says, “If I can make a difference or positively impact the women we have been working and training within our company, then hopefully they will reciprocate to others.” QCBN