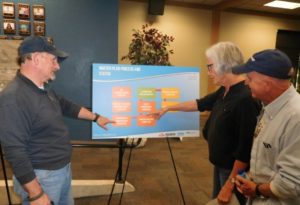 For more than a decade, ongoing discussions and recommendations about expanding the Prescott Municipal Airport, Ernest A. Love Field, have consumed hundreds of hours in deliberations and thousands of dollars in studies.

But now, it appears steps are being taken to expand the airport, perhaps starting with the almost 70-year-old passenger terminal.

The recent announcement of the formation of Friends of the Prescott Airport (FPA) group has already resulted in some significant contributions to initiate construction of a new terminal. According to Prescott Mayor Harry Oberg, a local doctor, Hojat Asker, M.D., contributed $10,000, and his colleagues at the Thumb Butte Medical Center kicked in another $15,000.

The goal set by the group has been announced as $3 million from the private sector. It is hoped, Oberg said, that private-public partnerships will emerge and raise substantial funds to dedicate toward terminal construction.

The Arizona Community Foundation is handling the receipt of contributions.

Beyond that forward movement, Delta Airport Consultants (DAC) was in Prescott recently to report on its findings for the Airport Master Plan. It was the organization’s third Open House for the public.

During a public presentation Nov. 1 at the Embry-Riddle Aeronautical University Student Union Building, Douglas E. Sander, DAC program manager from Raleigh, North Carolina, spent more than 90 minutes sharing study results about primary airport facilities. Included were recommendations about runways, taxiways, hangers, relocation of the control tower and support facilities. Implementation of such recommendations may be spread across a 20-year period, he noted.

Delta Airport Consultants was chosen in August 2016 following a review of its research proposal that focused upon preparing a comprehensive master plan. The company has a history of almost 40 years of specialized aviation and airport planning.

An audience of an estimated 50 community residents listened to recommendations and asked questions about each of the specific recommendations presented by Sander and his consulting team.

Sander emphasized that even if all recommendations were reviewed and adopted this spring, it might take three to five years before the FAA and other agencies issued final approvals.

Baker said those alternatives will be considered and placed on the agenda for a public meeting in February.

Baker said all options and alternatives must be reviewed and approved by the Federal Aviation Authority before any major activity occurred. “I am very excited with the feedback and support we have received from the public in regard to airport expansion and its future development,” she said. “The level of involvement from the public, not only in Prescott but also the surrounding communities, has been amazing.” QCBN

Specific details about master plan recommendations can be found online at prcmasterplan.com.