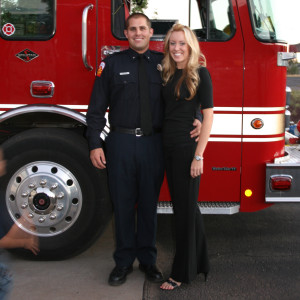 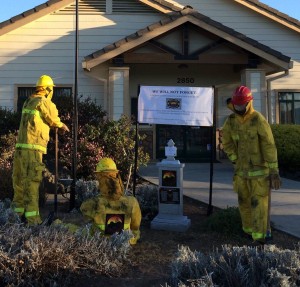 “I can think of no more stirring symbol of man’s humanity to man than a fire engine.”  -Kurt Vonnegut

Rock and Linda Hoffman have a first-hand understanding of that quote after this year’s deadly fires. The couple is thankful their home was spared, but their lives and their appreciation for emergency services workers will never be the same.

When the Doce Fire began burning in late June, Linda anxiously drove home from work. “It looked so bad I wasn’t sure if our house was still there because the smoke was so thick. ”

Hoffman learned homeowners in the area were on standby for evacuation. She packed boxes with documents and photos and prepared for the worst.  Fortunately, their home off Williamson Valley Road was spared in the fire, which charred about 6,800 acres.

Linda Hoffman watched the stream of fire engines, hotshots, and other emergency service workers drive by en route to the fire. “I’d always wave and they would always wave back,” remembers Hoffman.

She and a neighbor joined forces to get a big banner thanking the firefighters.  The owners of Prescott’s Sir Speedy lived up to their name; they created the sign in record time so it could be displayed for emergency responders to see as they drove to fight the blaze. Unfortunately, the sign found an even more poignant home a short time later: Prescott Fire Station 19, as part of the memorial for the Granite Mountain Hotshots.

On June 30, 19 members of the Granite Mountain Hotshot Crew perished fighting the Yarnell Hill Fire southwest of Prescott. What became the deadliest fire in Arizona history touched people all over the world, many of whom heard the news with disbelief.

Nicole Christian was panic stricken when she got a call from her brother, a Prescott police officer. Not only did she have childhood friends who fought fire in the Prescott area, her husband also was fighting the Yarnell Hill Fire, on loan from Summit Fire, a Flagstaff-area department.  “It was panic.  My brain went blank. I was texting Nik frantically and calling him until he answered,” she said.

The days that followed, including the memorial service in Prescott Valley, were emotional for Christian and thousands of other people. “One thing we learned from this is that life is so fragile.  You have to have fun and appreciate every day you are given,” she added.

Christian’s mom, Linda Hoffman, agrees. “Everything becomes more precious.”  During the aftermath of the Hotshot deaths, she observed a change in people throughout the greater Prescott region, an attitude she attributes to people not taking other people for granted. “I think they’re more appreciative. And I notice that there are more signs up. People are stopping other people, especially firemen, and saying, ‘Thank you for everything you do.’”

While she thinks it is sad that it takes a tragedy to shake things up, Hoffman has noticed she has changed, too. “I text my children more. You never know when that time you say, ‘Have a good day’ might be the last time you get to say that.”

As rebuilding has gotten underway on some Yarnell Hill homes lost in the fire, the holes of grief surrounding the loss of 19 lives may never be filled. In different ways throughout the community and in many other communities, people whose lives were affected by this summer’s tragedy are finding their own ways to remember the Granite Mountain Hotshots’ sacrifice.

Throughout the month of October, in a seaside town more than 600 miles from the Quad Cities, hundreds of people will be paying tribute to the Granite Mountain Hotshots. A display has been created for the town of Cambria, California’s annual scarecrow festival. Two years ago, a display depicting Sept. 11 firefighters erecting a flag on a pile of rubble brought tears to the eyes of many observers. Cambria Fire Captain Steve Bitto expects a similar reaction this year.

In addition to honoring the fallen throughout October, Cambria’s Sons of the American Legion paid a tribute to the Granite Mountain Hotshots on Sept. 11.  Bitto says the loss at Yarnell Hill is affecting communities everywhere. “When something like that happens, people look at their local services and say that could happen to our local guys and gals,” added Bitto, who identifies with people in the fire service everywhere. “We are all a family, no matter where you go. And we all relate to each other and relate to when you lose somebody. It hits you down at a family level.”

Back in Arizona on the Kaibab National Forest, Technician and Fire Engineer Keith Halloran has had a similar reaction since June 30.  He has many Hotshot firefighters he calls friends and was shocked and saddened by the loss of the Granite Mountain Hotshots. “To lose a whole crew is what really affected me and a lot of the guys I worked with.”

Halloran is a division supervisor who works on Type 2 Incident Management Teams. He knows the deceased Hotshots received a very high level of training and the loss is difficult for him to fathom. “No tree is worth a life. No property should be worth a life. We should be there protecting ourselves. Trees will grow back. Homes can be rebuilt. I have been up against houses that just are not savable. And still, we try our best.” QCBN

In my earliest memories, my father is in uniform, looking strong and foreboding. Growing up hearing LAPD stories and wondering about the safety of my dad, I never envisioned one day marrying someone in the emergency services.  Alas, when I finally met “The One,” he was a man in a uniform: firefighter and Arizona Army National Guardsman.

During our two decades of holy matrimony, I have learned to live with new levels of fear; perhaps more accurately, I have learned to relax into uncertainty and make more room for faith. When my dear husband was deployed to Iraq in 2006 and 2007, I got to practice the skill of surrendering my fear and to share this outlook with our young daughters. I give thanks every day that my husband came home.

However, the unimaginable could still happen. Retired from the Guard, and promoted to fire captain, my spouse takes his responsibilities seriously, exerting tremendous effort in his job of keeping others safe. He belongs to a brotherhood, much bigger than our family; when I said, “I do,” my oath and his commitments became inseparable. And while this reality has settled deep in my bones over time, I say a prayer each time I hear the Firefighters’ Creed, especially its last verses.

I want to fill my calling and

To give the best in me

To guard my neighbor and

And if according to Your will

I have to lose my life

Bless with Your protecting hand

My children and my wife

Theresa Bierer is a journalist and former managing editor of Quad Cities Business News. Her husband has been in the fire service since 1991.