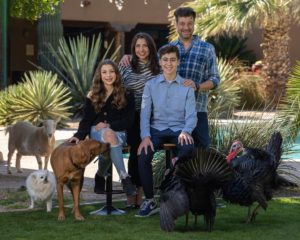 Watching images of a big storm rage through the South can leave a lasting impression. Some, like Dylan Capshaw, are moved to action.

After seeing the damage and flooding in the wake of 2017’s Hurricane Harvey in Texas and Louisiana, the Scottsdale fifth grader told his parents he wanted to buy a plane ticket to Houston to personally deliver money to help animal rescue efforts.

With supportive parents, David and Amy Capshaw, he started the Dylan Capshaw Wildlife Foundation at age 11 to save animals in crisis. In 2017, he raised $1,500 to support Rescued Pets Movement, a small Houston shelter.

“I recognized the need for outside help with all of the dogs and animals struggling in the water from all the flooding,” said Dylan. “Many of them appeared to be abandoned or lost. I knew that for me, even though I was a kid, it was time to take charge and help out however I could. That’s how I got started.”

Since then, his efforts have expanded. Now, he has between 50 and 60 animals in his care,

including birds, reptiles, a hedgehog and prairie dogs. He also has a 24-hour hotline and newsletters he designed.

His most exotic rescue to date is a baby girl kangaroo named Jade from an animal ranch in Texas. Rejected at birth, the tiny creature needed to be cared for around the clock. Dylan set his alarm for hourly night feedings. Jade is now 2 years old.

Dylan’s classmates are fascinated by his rescue efforts and many animals. Many want to volunteer at what has become something like a farm. Dylan gets up early in the morning to start caring for the animals and spends about five hours a day on feeding and care.

To help with some of the more unusual animals, he turns to Arizona Exotic Animal Hospital and Liberty Wildlife in Phoenix for support and guidance.

The Dylan Capshaw Wildlife Foundation takes part in fundraisers and sponsorships. The organization has adopted a stretch of road for upkeep because Dylan believes that having a trash-free planet is key to keeping animals safe. Last year, he raised funds to help animals impacted by the large wildfires.

Dylan also has learned how to make masks and face shields with a 3D printer. He launched another non-profit organization in 2020 called For the Frontline, which has sent more than  3,000 personal protective equipment (PPE) items to healthcare workers.

“I saw that there was a PPE shortage and that the frontline workers that were out there helping us couldn’t go home to their families,” he said. “So, I started making them, and we sent out thousands of care packages.”

In addition, he delivered catered food to five different fire stations and two COVID Intensive Care Units in hospitals across the Phoenix area through a partnership with various restaurants. He is also the driving force behind a new PPE vending machine called the Sanitation Station. The first one was unveiled on Dec. 4, and is located in the Scottsdale Quarter.

Dylan’s hard work and service has been recognized nationally. He is one of 20 finalists for the “Kid of the Year” award sponsored by Nickelodeon, Time magazine and Time for Kids in 2020.

“I considered it a real honor and it’s been really amazing to be included in it, especially considering all of the other finalists and what they’ve done,” he said. “Nickelodeon and Time recognizing young people making a difference feels so great. It’s been really wonderful.”

Dylan’s next goal is to acquire more property for a sanctuary beyond his parents’ home. The now 14-year-old is also considering a future career in Arizona politics to further his impact on helping animals and the environment. “Nothing is too big or small to pursue or accomplish,” he said.