You are here: Home / Local News / Arizona’s Christmas City Glistening for the Holidays 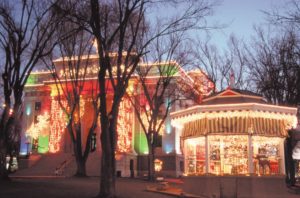 Prescott, known as “Arizona’s Christmas City” for the past 27 years, is decorated for what local planners say will be the best holiday season yet.

“Our judgment is that this year will likely be a record breaker for visitors who enjoy what has become a premier holiday event in Arizona. We can’t even begin to estimate the positive economic impact of having locals and visitors involved in several days of holiday activities. It will be in the hundreds of thousands of dollars,” said Kendall Jaspers, executive director for Prescott Downtown Partnership (PDP).

Organizers have been planning for months for the major attractions of Christmas City, decorating the historic Courthouse and wrapping lights on the almost 200 trees of the Courthouse Plaza.

“All this was preparation for what has been called the signature event in Prescott’s long history of celebrating Christmas,” he said.

This year, the parade has the theme of “All I Want for Christmas,” said Harold Viehweg, a parade organizer and a Prescott Chamber of Commerce staff member.

Jaspers praises local leaders and organizations for raising almost $80,000 to support the Courthouse Lighting. “Without the help of Tommy Meredith and the Friends of Jersey Lilly [a Whiskey Row saloon], we wouldn’t come close to funding the lighting. They annually have been the biggest contributors to the event because they solicit donations for live and silent auctions.”

“Every year, people and organizations in Prescott step up and make sure we keep our title as ‘Arizona’s Christmas City,’” said City of Prescott Tourism Director Don Prince. “From the iconic Courthouse Lighting and the Christmas Parade to Acker Night and some of the newer attractions like the Boot Drop New Year’s Eve, Prescott pulls out all the stops to make each holiday season better than the one before.”

Chamber of Commerce CEO David Maurer has estimated that more than 600,000 lights will be sparkling in the downtown area during the holidays.

Another event to note on calendars is the 28th Annual Acker Night on Friday, Dec. 9, which will feature musicians from throughout the region in downtown businesses. The music begins at 5:15 p.m. across the street from the Courthouse with a public sing-along of the famed Handel’s “Hallelujah Chorus.” Following that, more than 100 musicians will be performing in shops.

The event is named after James S. Acker (1865-1955), a generous Prescott developer and merchant who contributed property and other resources for recreational parks and to support music for children. Acker Night is a fundraiser for school music programs in Prescott, Prescott Valley and Chino Valley.

In other holiday news, the “World’s Largest Gingerbread Village” at the Prescott Resort on Highway 69 will be open seven days a week until the New Year. The village features more than 100 hand-made gingerbread houses and other structures created by local residents and businesses. “Builders” pay for “lots” on the display streets so they can place their houses and other items for viewing. The village is used as a fundraising project to help support Yavapai Big Brothers, Big Sisters. It is estimated that more than 50,000 people will wander the long lobby corridor to see the colorful and creative village, which has a model train chugging through the community.

Also ongoing through Dec. 30 is the Village of Lights in Prescott Valley. Located south of 6th Street, the drive-through Village of Lights greets visitors with an oversized animated toy soldier pointing the way toward dozens of sparkling holiday decorations, many in motion. Organized by the Prescott Valley Chamber of Commerce, the display features millions of lights and has become a traditional favorite in the Quad Cities area. QCBN 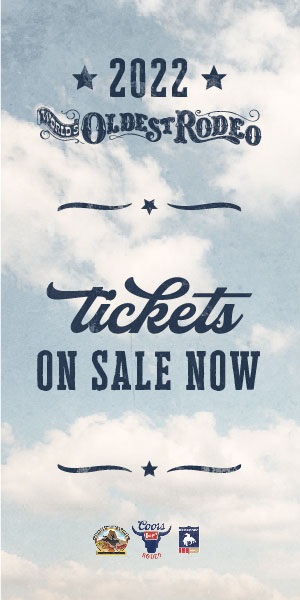