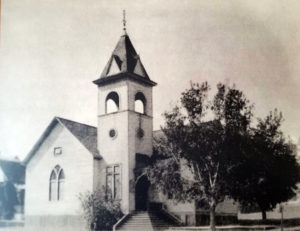 Despite limitations and closures mandated by the COVID-19 pandemic, the Prescott United Methodist Church (PUMC) has been celebrating its 150th year of serving churchgoers in the greater community throughout 2020.

“It’s not quite how we earlier had envisioned commemorating such a major event in church history and the state, but we’re nevertheless doing it,” said Rev. Dan Hurlbert, senior pastor at PUMC.

In January, Hurlbert announced that he and church staff were dedicating the entire year to celebrating the historic church’s 1870 founding. He explained that probably only a few people in the community knew the building at the intersection of W. Gurley and S. Summit is the oldest Protestant church in Arizona.

“We’re celebrating, even with the restrictions placed on us by COVID-19, by doing something special at every service to remind our parishioners of the heritage and legacy they have in this church,” Hurlbert said.

The church is older by 17 years than the World’s Oldest Rodeo, which is 133 this year. Unfortunately, a major church celebration scheduled for Fourth of July weekend had to be postponed because of the pandemic. It will be rescheduled, Hurlbert said. The famed Voices of Liberty, an award-winning vocal group from Walt Disney World in Orlando, Florida, is expected to perform in the church later this year in a public concert.

Meanwhile, a 150th anniversary celebration is planned for November. “We’re spending a lot of time working on those details.”

Currently, Saturday and Sunday services are being streamed online until further notice. Hurlburt encourages residents and visitors to stay updated on anniversary activities by checking the church website.

PUMC has been described as the geographical and spiritual center for the community over the decades. “It’s our intent to continue doing that,” Hurlbert said. “We will provide quality in worship through music and other services. The city and greater community feel our impact because of our intense outreach. We’re proud of the influence we’ve had on this historic town.”

PUMC’s beginnings go back to December 1870. That winter, Rev. Alexander Gilmore arrived to serve as an army chaplain at Fort Whipple in what was then Arizona Territory. Gilmore, ordained as a Methodist minister when he lived on the East Coast many years before, preached the first Methodist sermon in Prescott on Dec. 7 in a primitive two-story log building that doubled as a courthouse and community center. He was affiliated with what was then called “Northern Methodist Church,” so named because of the division among Methodists over the slavery issue.

Days later, Gilmore was joined by Rev. Alexander Groves. Groves had been serving congregations for the Methodist Episcopal Church South. Thus, Prescott had two Methodist ministers, both operating out of the same church. The two presided over weekly services – one on Saturday evenings and two on Sunday mornings.

By 1872, the Methodist Church South worshipped in a frame building on Marina St.; but in 1876, wealthy Prescottonian Henry Fluery donated land at the corner of Gurley and Summit streets. That is where the church stands today. In 1939, what had been North and South denominations were nationally united as the Methodist church.

Decades ago, other denominations began establishing churches. They were invited to use the Methodist Church as a base. History shows that Baptist, Congregational, Episcopal, Presbyterian and Roman Catholic ministers and priests all used the Methodist church temporarily as they were identifying their own sites.

A detailed history of how Gilmore and Groves and their successors founded what is now PUMC was written by Rev. Stan Brown, a retired Methodist minister who now lives in Prescott with his wife, Ruth. Copies of that document are in libraries or online at prescottumc.com/about.

Some suggest the title Brown used, “Prescott’s Mother Church,” be emphasized as part of the anniversary events.

Additional church history was assembled by longtime Prescott resident Jean Phillips. A special item is the large altar Bible brought to Prescott in 1874. It is on display in the Prescott Public Library with the other items Phillips and her colleagues collected several years ago.

A commemorative bronze plaque is at the base of a tree located between the original church building and the sanctuary built just a few years ago. QCBN