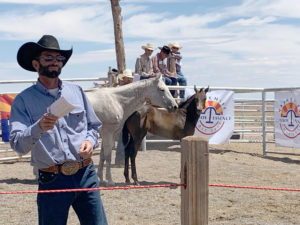 In an effort to keep spectators and participants safe this summer, the traditional Western 2020 Babbitt Ranches Annual Colt Sale will not be held in July, for the first time in decades. Instead, organizers are planning an online auction in March 2021.

“We want to thank everyone who joins us each year out at Spider Web Camp for the many years of friendship and support. We will certainly miss seeing everyone in the stands,” said Babbitt Ranches President and General Manager Billy Cordasco. “This year’s colts are beautiful and strong as always. We will be proud to show them off in March!”

The time-honored event is expected to return live to Spider Web Camp, north of Flagstaff near Gray Mountain, next summer. It is scheduled for Saturday, July 10, 2021.

Since the 1990s, locals and visitors look forward to the lively auction that ordinarily occurs the second Saturday in July. Hundreds of people come for a sample of the Old West as Babbitt Ranches cowboys on horseback bring colts, fillies and mares across the vast expanse of Northern Arizona and into the corral. Serious horse buyers travel from all over, even other countries, to bid on Babbitt Ranches colts for ranches, rodeo activities or trail riding.

“Some may think the event is about buying and selling horses, but the Babbitt family intention is much broader than that. It’s about sharing and participating, and being grateful for the day, the wide-open spaces, the extended community, the grass-fed, hormone-free premium beef BBQ and the opportunity to gather together,” said Cordasco.

Babbitt Ranches horses carry the legendary Hashknife brand. A “hash knife” is a kitchen tool used for making beef hash. It has a half circle steel blade, attached to a wooden handle, that is rocked back and forth across cooked beef to create hash. But, the brand signifies much more. It originally belonged to the Aztec Land & Cattle Company, which operated in Northern Arizona from 1884 to 1902. It later became the property of the Babbitt family. With careful consideration of pedigree, Babbitt Ranches has developed a successful American Quarter Horse breeding program largely from descendants of the early Hashknife horses and the Driftwood (champion rodeo American Quarter Horse) lineage.

Babbitt horses have a worldwide reputation for being solid all-around ranch horses with cow sense that can work all day and maneuver across rough, rocky terrain. Cowboys say they have speed, looks, ability, a good disposition and are often winners in the rodeo arena – from local high school competitions to world championships. They are said to be tough enough for the working cowboy, yet gentle enough for young cowboys and cowgirls. QCBN