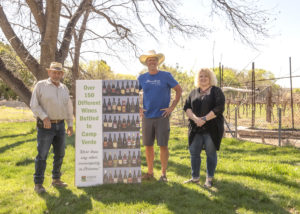 “With a lot of grapes grown in the Wilcox area, Camp Verde is a great destination and shipping route for bottling grapes.”

Now that Verde Valley has been designated an American Viticulture Area (AVA), the Town of Camp Verde has racked up another achievement: Bottling more than 150 different wines, more than any other Arizona municipality.

Town of Camp Verde Economic Development Specialist Crisi Clark has validated this claim. “After researching several avenues in the viticulture industry, I was delighted to discover that Camp Verde bottles more wine than any other township in Arizona. We are grateful for the winemakers that have not only created employment for our town but have allowed Camp Verde to play a small part in this growing industry.”

Camp Verde Economic Development Director Steve Ayers says most wineries in Arizona are in unincorporated areas, not in cities or towns. “We did an analysis of where wines were bottled and where wineries were located and realized that Camp Verde clearly had the most bottling facilities within a municipal boundary. It was surprising for us and a distinction that we’re proud of.”

Camp Verde is a strategically important location with a large concentration of seasoned winemakers, said Arizona Stronghold Winery winemaker Jason McCluskey. “With a lot of grapes grown in the Wilcox area, Camp Verde is a great destination and shipping route for bottling grapes.”

“Our primary production facility is rather small and not conducive to a full-scale bottling operation,” said Caduceus Cellars and Merkin Vineyards National Sales Director Calvin Arnold. “The Camp Verde location allows us the space to house our bottling line and cased goods storage. This facility currently bottles wines produced under the Caduceus Cellars, Merkin Vineyards, Four Eight Wineworks, and Puscifer: Queen B labels.”

The verdant region of Camp Verde currently has three locally owned wineries, Alcantara Vineyards and Winery, Salt Mine Wine and Clear Creek Vineyard and Winery, which was the first to break ground in 1998 with its innovative sustainable organic methods of grape growing.

Each Camp Verde winery bottles its own wine.

Alcantara Vineyards and Winery was annexed into the Town of Camp Verde in 2020 and bottles 23 different wines at their winery. “We have 17 wines grown on our 87 acres,” said winemaker Ron Brumley. “Single varietal, merlot, cabernet and several blends. Aside from the 150 wines bottled here in Camp Verde, two-thirds of our wines are Verde Valley AVA.”

The small family-owned vineyard and winery Salt Mine Wine is located in a historic farming area of Camp Verde and specializes in growing Italian varietals such as Malvasia Bianca and Sangiovese.

As documented in the book, “Images of America Camp Verde,” by Steve Ayers and the Camp Verde Historical Society, the earliest pioneers came to the region in 1865. “Drawn by the promise of ample water, rich bottomland and lush grassland, a party of 17 men and two women left Prescott, Arizona heading east into the Verde Valley. The party established a farming and ranching community near the confluence of West Clear Creek and the Verde River. Over the next 35 years the settlement thrived and became known as Camp Verde.” QCBN