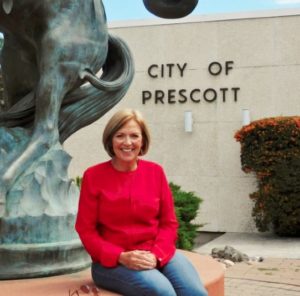 A longtime resident of the Quad Cities area observed, “Billie Orr is a really neat person. And she always looks so sharp in red – smart and sassy, just like she is.”

That seems a solid observation. Prescott City Council member and community activist Billie Orr dedicates her time and many abilities to serving the greater community and speaking out boldly about causes in which she believes.

Though a native of Jackson, Mississippi, Billie, as she is known by most, has been in Arizona off and on for almost 50 years. Her family moved to Phoenix in 1968. She enrolled at Arizona State University (ASU), and earned three degrees in education there – a bachelor’s, master’s and, ultimately, a doctorate in 1994. Along the way, she married Bob Orr, then an Air Force pilot and officer (now retired). They will celebrate their 45th anniversary this month. Their son, Porter, is a retired Navy pilot who served in Iraq and earned an MBA at the Massachusetts Institute of Technology. He and his wife, Jennifer, and the Orrs’ two granddaughters now live in Orlando, Florida, where he works for Disney.

“I’ve no regrets about having focused much of my career on teaching and administration, for that training and experience prepared me to meet challenges and make positive contributions, no matter what I do,” said Orr.

And “do” she does. A typical week includes sessions and meetings for the Prescott City Council, where she is an elected member, speaking engagements, travel to Phoenix for more meetings, charitable events and media interviews.

Adult Career is Varied and Influential

From the time she accepted her first teaching job until she and her husband finally retired in Prescott six years ago, Orr has typified diversity. Among her achievements:

Beyond her formal professional or elected positions, Orr has been involved in

dozens of volunteer and philanthropic organizations. Currently, she is active in the Prescott SunUp Rotary Club, the Free Wheelchair Mission and the Willow Creek Baptist Church. She recently was elected to the board of directors of Arizona Town Hall, a statewide private, non-profit civic organization that serves as a catalyst for conversations to create significant change in Arizona’s public policy.

Orr says one of her most recent greatest satisfactions “…was seeing so many people in Prescott endorse our move to strengthen the business economy, emphasize tourism, and create a ‘Downtown Entertainment District’ for the benefit of all our merchants.”

In contrast, she says her biggest disappointment has been “…state or local political leaders who put their personal interests above the welfare of the citizens. Some of them distort the truth for their own benefit.”

She explained, “I have a strong Christian belief. I feel compelled to put faith, family and friends first in all that I do. I enjoy serving others.”

What was the worst advice you’ve ever received?

“I had an older uncle back in Mississippi when I graduated from high school who told me, ‘Kid, don’t waste your time or money going to college.’ He was wrong!”

Whom do you admire and why?

“My mom. Because my dad had a heart attack when he was only 35, she was always a breadwinner. She taught me and my sister one really valuable life lesson: Always have a strong work ethic, and do what you say you’re going to do.”

“We’ll travel anywhere, nationally or internationally. But I especially loved Israel. It is a wonderful nation, full of culture, history, tradition – and positive advancement. God has blessed that country.”

When was the last time you sang in public?

“The last time I was in church. I used to sing in the choir until I got so busy. But I often sing in special programs like Easter or Christmas or patriotic services. I enjoy it.”

What is your “super power” and when do you use it?

“I think my strength, if I have one, is being able to bring people together for a common purpose. I also think my attitude, which I always try to keep positive, is important. I truly believe we all need to share a smile.” QCBN