You are here: Home / Tourism / Building on Tourism Tool Chest 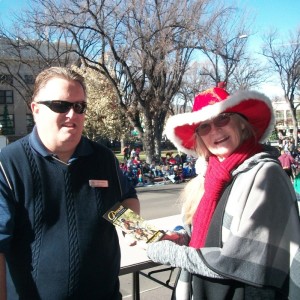 Tourism is a major multi-million contributor to the economy of Prescott, and city leaders are optimistic that impact will continue to increase.

To encourage even more visitors to the greater Prescott area, the City of Prescott Office of Tourism is distributing a comprehensive 64-page brochure at visitor centers throughout the state. It also will be available at nine different information centers in Phoenix Sky Harbor Airport, which recently was ranked the ninth busiest airport in the nation – more than 20.3 million passengers go through its gates.

The brochure also will be distributed at consumer and tourism trade shows throughout the United States and in several foreign countries.

The colorful brochure contains not only general information about the Prescott area, but also about events and special activities such as the World’s Oldest Rodeo, the July 4th Parade and Christmas City activities that make Prescott unique, according to City of Prescott Director of Tourism Don Prince.

It also has details about dining, shopping, lodging, the performing and visual arts, museums and educational centers, and outdoor recreational attractions such as golfing, boating and fishing and day trips. Several pages are dedicated to real estate.

What makes the brochure especially unique is that it costs the City of Prescott and its taxpayers virtually nothing except for the minimal costs of distribution.

Prince explained that he had been pushing for a comprehensive brochure since 2010, when he first became tourism director.

“Budget restrictions then limited us to a very small eight-panel brochure. It didn’t have space to describe all that is available to appeal to visitors,” he said.

The limited budget prompted Prince to seek other options. He found one in a publishing firm called RAXX Media and RAXX Direct Marketing; the media production center headquartered in Casa Grande specializes in local consumer-oriented promotional brochures and magazines.

Elaine Earle, RAXX publisher and chief financial officer, says 85 advertisers supported the Prescott Visitor Guide. “We had a close collaboration so that useful information such as weather, drive times, day trips, lodging, maps and so on are clearly highlighted. We fully expect this to be an annual publication.”

RAXX proposed to print 35,000 copies at no cost to the city. “It will answer the requests we get for information generated by our national advertising campaign,” said Prince. “It will be used by our sales staff as those people meet with meeting planners, tour operators, travel agents and the like.”

“The informative brochure will likely bring new visitors to the community,” said David Maurer, chief executive officer of the Prescott Chamber of Commerce. “It’s a new tool in the tourism tool chest, and it may reach audiences that have been missed before.”

Tourism’s beneficial economic impact has been documented in the “Prescott Visitor Intercept Study” conducted in 2014-2015 by the Northern Arizona University W.A. Franke College of Business, co-funded by the Arizona Office of Tourism and the City of Prescott.

Among key economic findings were:

The study also reveals that 61 percent of visitors are from out-of-state, with most coming from California. Maricopa County provides the majority – 67 percent – of visitors.

Two-thirds of the visitors stay overnight and collectively spend thousands of dollars on lodging, food, entertainment and shopping, with the average length of stay for overnight visitors at three-and-a-half days.

Hotel occupancy rates for the past 12 months are up seven percent from last year.

The Prescott Chamber of Commerce reports that, in just November, more than 2,000 visitors entered the office.

“The brochure is a great project in our evolution and advancement in promoting Prescott as a primary destination,” says Margo Christensen, vice president of marketing for Ponderosa Hotel Management Services, who serves on the Arizona Lodging and Hospitality Association board and the Prescott Tourism Advisory Committee.

“The completion of this specific marketing tool is a good example of how we have advanced and stepped up our promotional efforts. The past five years have seen the Prescott Office of Tourism evolve into a highly effective department with the focus of making Prescott a highly visible destination for state, national and international visitors,” she added. “I think local businesses and attractions are really going to love this brochure, which has at its ultimate purpose the boosting of the local economy.” QCBN