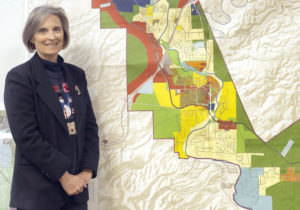 Elected as mayor in 2020, one of Jenkins’ top mayoral goals is to build relationships, not only within Camp Verde but with neighboring communities as well.
Chiseled deep in Dee Jenkins’ memory is the impact that Bill and Genevieve (Vieve) Gore, founders of W. L. Gore & Associates, had on her life. She credits them for her successful career and current position as mayor of Camp Verde. “I would not be the person I am today without their support and encouragement,” she said.

“The Gores opened the door for me,” said Jenkins, who was born in Havre de Grace, Maryland. “Soon after I applied for a position with W. L. Gore & Associates headquarters in Newark, Delaware [20 miles from her hometown], Bill and Vieve Gore hired me. I was 17 and had just graduated high school.”

It was also three days before her 18th birthday, in October 1970. “I will never forget the day Vieve called me and asked if I could come to work the next day,” recalled Jenkins. “I was scared because I didn’t want to lose the job because I couldn’t work until the following Monday when I turned 18. My dream was to attend college, but I was already out on my own and needed a job.”

What followed was a 31-year career with the global enterprise.

“I started out as an invoicing clerk, using a typewriter, not a computer, and by the late 1970s, worked up to the corporate accountant position,” Jenkins said. “Eventually, due to personal circumstances, I transferred to Flagstaff. The medical division of W. L. Gore was just starting. It was 1980.”

Jenkins settled in to the position of financial analyst and eventually moved up to a plant leader before leaving the company in 2001.

“I walked through the door and persevered, but they gave me the opportunity,” said Jenkins. “If you took the opportunity, it was endless where you could go in that corporation. If you showed up for work and did a good job, the benefits were there.”

In 1982, Jenkins married her husband, Clif, and in 1997, moved to Camp Verde. “I love the beauty of the mountains in Flagstaff, but I got a little tired of the cold months,” said Jenkins, who loves being outdoors.

For four years, Jenkins commuted from Camp Verde to Flagstaff and left W. L. Gore as an associate in 2000. She worked briefly as a consultant, ending her career there in 2001. That same year, she found an open door at Quintus Inc., a manufacturing plant that reminded her of the Gore culture.

“I ended up reinstalling Quintus, Inc., computer systems, reconfiguring the systems to fit their business needs and priced and costed all their products. I started in 2002 as a full-time employee and, today, continue to do part-time consulting.”

Adding to her professional list of achievements, Jenkins became general manager of operations and chairman of the board of directors at Quintus Inc., and moved the company to an Employee Stock Ownership Plan (ESOP), which equates to an employer-owned company.

Insisting that she is not a “political person,” she felt compelled to run for Camp Verde City Council. “I wanted to understand how things work and then offer my opinion on how we can do things better when dealing with the public, the community and its citizens.”

Elected as mayor in 2020, one of Jenkins’ top mayoral goals is to build relationships, not only within Camp Verde but with neighboring communities as well. “We can work together to sustain this beautiful valley we live in. An example of working together for the betterment of our community is this year’s Earth Day video with Yavapai-Apache Chairman Jon Huey.”

Using funds wisely is also a top priority for Jenkins. “We finally closed the deal on purchasing the Camp Verde Water Company, which has been in the works for decades. This is security for citizens here. Ownership of the wells and delivery of water equates to water security for our citizens and future developers.”

“I’ve known Dee since she moved to Arizona from Delaware. She’s one of the smartest people I know,” said retired W. L. Gore Associate Ken Moll, a member of the Quintas, Inc., board of directors. “She always knows the right questions to ask the people who are supposed to have the answers, plus she has a very big heart and cares deeply about the community in Camp Verde, her family and the people she works with.”

While living in Flagstaff, Jenkins lived in Doney Park and for many years was treasurer of Black Bill Water Company, a volunteer position. She is also past president of Northern Arizona Horsemen’s Association (NAHA).

“I’m so proud to live in the Verde Valley and the diversity of the people who live and work here and how we’re able to work together, along with the Yavapai-Apache Nation, which has multiple locations within the Town of Camp Verde.”

With two grown sons, Jenkins’ youngest lives in Camp Verde and, ironically, commutes to Flagstaff, where he is employed at W. L. Gore & Associates.  She has two granddaughters, 14 and 22 years of age. QCBN