You are here: Home / Local News / Celtic P.U.B. Offers Haggis and a Jig 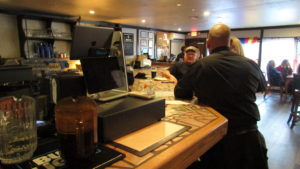 The Celtic community in the Quad Cities area is excited about The P.U.B. Prescott because it brings Celtic food, drink, entertainment and culture.

P.U.B., which stands for Prescott’s Unique Brewhouse or Place where You Belong, fills a void left when Celtic Crossings Pub closed a few years ago.

St. Patrick’s Day will be a huge event and another big event is Robert Burns’ birthday on Jan. 25, when the poet is celebrated by Scots around the world by having a meal, usually haggis, which is the national dish of Scotland.

David McNabb, who serves as emcee for musical events, offers Celtic history, toasts and giveaways to the audience.

He explained that Celtic refers to traditional people from seven remaining lands: Ireland, Scotland, Wales, Cornwall in southwest England, Isle of Mann, Brittany in France and Galicia in Spain. These are the tribes that dominated Europe at one time.

“The culture came out of those tribes and most of it remains through their music or food,” he said.

McNabb has been working with Celtic musicians for 18 years and P.U.B. has six Celtic bands in rotation, five of which hail from the Phoenix area and one of which is local. He said the musicians are usually duos or trios so as not to overpower the establishment.

Jody and Brian Cole, who have owned the Lonesome Valley Brew Pub in Prescott Valley for eight years, noticed this building on Marina Street, where a wine bar used to be located, was up for rent. They rented it just before the pandemic hit in mid-March 2020.

Jody said they have a great landlord who worked with them before they were able to open on Black Friday last year. Because of the pandemic, Jody said many people were not aware that The P.U.B. was open. The owners did not have their grand opening until June.

“It’s like we’ve been opening in slow motion,” Jody said about the impact of the pandemic.

Jody said Prescott has 20 breweries and wondered if the community really needed another. However, they had so many requests for a Celtic pub that they went with it. Her husband, Brian, is said to be 98.2% Irish. “It was serendipity,” she said.

Aside from offering many types of beer, P.U.B. offers irn-bru, the most popular soda in Scotland. Irn-bru is predominantly vanilla and citrus, with a bubblegum aftertaste. It was originally known as Iron Brew, but the Scottish government required the name change because there is no iron in it and it isn’t brewed. Irn-bru also is known for curing hangovers.