You are here: Home / Business / Center for the Future Set for Cyber Mobility 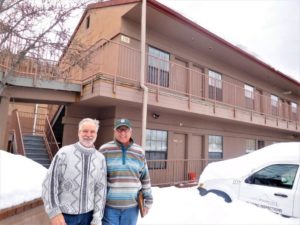 Cyber mobility is a theme that will see technologies continue to grow and dominate through the next several decades.

The Center for the Future (CFF), a project dedicated to the creation of economic development growth and quality job creation, has moved into office space provided by the City of Prescott.

The Prescott City Council approved a lease agreement on March 9, making the space available to the Center for the Future and its parent organization, the Prescott Regional Opportunity Foundation (PROF), a non-profit organization.

The space, formerly identified as the City Hall Annex just east of Prescott City Hall, was made available when the city reorganized several departments as a result of so many employees working from home during the pandemic. A total of 10 office suites are available in Building 218. Other offices in the basement of 216 and the 220 South Marina facility will soon be available after some renovation.

CFF director Jon Haass, also a professor at Embry-Riddle Aeronautical University (ERAU), said almost 3,500 square feet of office space will be remodeled, refurnished and available to accommodate the companies participating in the center. Some office furniture has been donated and moved into offices to help the CFF partners.

Haass said a ribbon-cutting ceremony to formally announce the opening of the CFF is expected this month.

The intention of CFF is to be an incubator, accelerator and attractor of companies to the greater Prescott region. “Cyber mobility is a theme that will see technologies continue to grow and dominate through the next several decades,” Haass said.

The CFF website suggests that by joining the CFF, “…you will gain access to partner with established and proven providers throughout Arizona and the western U.S. Mentors in our ecosystem are experts and leaders in their industry, having built successful businesses, and want to help build yours.  Our innovation platform is the single best place to find your next big customer.”

The first company to move into the new office space was SimpleWAN, which focuses on assembling remotely-managed network devices so that it is easier to connect, secure and automate distributed and remote networks. SimpleWAN’s CEO Eric Knight moved the company from Phoenix to Prescott.

Another partner company is Cyber Core International, which works with large corporations to provide executive security. As a result of its move to Prescott, the company will expand its offerings to include managed cyber security offerings. It was relocated from San Jose, California, by CEO Gabe Navarette, an ERAU-Prescott alumnus.

CFF is a program created through the PROF, sponsored by the Prescott Chamber of Commerce Foundation. PROF has formed partnerships with many local and regional organizations, including the Arizona Commerce Authority, Arizona Technology Council and Northern Arizona Council of Governments (NACOG).

“We’re pleased to be involved in nurturing the partnership among these organizations and these educational institutions,” said NACOG Regional Director Teri Drew. “It’s such a pleasure to work with professionals who have solid economic and financial goals that benefit the greater community.”

In addition, CFF and PROF are reaching out to students and alumni of local institutions of higher education such as ERAU, Yavapai College and Northern Arizona University. CFF also is establishing relationships with Arizona State University and the University of Arizona.

Jim Robb, vice president of PROF and a former City of Prescott economic development consultant, said support for the project has been enthusiastic. The City of Prescott set aside $92,000 as initial support for the center. Various corporate and individual contributions, plus grants from local state and federal sources, will continue to provide financial assistance.

Zach Ferres, co-founder of Coplex, Hal Hayden, an executive with Trinity Capital, and Tony Hamer, president of Growth, Strategy and Innovation, have joined the CFF advisory board. QCBN