You are here: Home / Education / Center for the Future Taking Shape in the Present 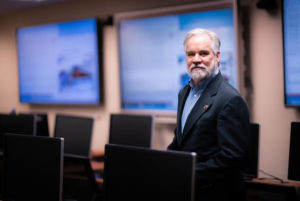 What was an ambitious College of Security and Intelligence (CIS) vision just four years ago during the annual OctoberWest activities at Embry-Riddle Aeronautical University’s (ERAU) Prescott campus has now become a reality.

That vision, called Center for the Future, was conceived by Jon Haass, who was a founding CIS faculty member and professor. He later was department chair and then interim dean of the ERAU Cyber Intelligence and Security program.

“Our center will form the nucleus for technology job growth and innovation,” Haass told the Quad Cities Business News.

The proposed site for the multi-story center is on the east side of the Deep Well Ranch/Chrystal Lane and SR 89 intersection near the Prescott Regional Airport. Haass and his colleagues are currently working with architects and a builder in defining the needs and concept. Construction is expected to begin this coming year, thanks to support from local individuals and groups, Haass said.

Several anchor tenants for the center already have signed on. One is Katalyst Space Technologies, which was created by ERAU grads Ghonhee Lee and Kaleb Beebout. It will focus on lower cost and more sustainable approaches to satellite operations.

Another tenant will be Simple WAN from Phoenix, a networking company focused on small and mid-sized businesses and their need to secure employee home office connectivity.

Additional innovative companies that have expressed interest include GSIS, an international global security firm with headquarters in Washington, D.C.; Cybercore International from Silicon Valley, California; and GOPADZ, from Southern California.

As defined by Haass, the mission for the center is to become a hub for incubation and innovation, accelerate growth of companies, create local jobs for local residents, and attract companies to locate in the Quad Cities area and to provide employees and their families with opportunities for high quality of life in the greater Prescott region.

When Haass first proposed the center, it was supported by then-ERAU Chancellor Frank Ayers, now retired, and several city and community leaders. Current Chancellor Anette Karlsson has enthusiastically endorsed the objectives of the center.

The advisory group, which helped define and propel the center, is now initiating the paperwork to create a separate 501(c)3 corporation. Those legal documents should be completed within the next few months. That status will allow donations, gifts and other philanthropic opportunities to have a tax advantage and to create eligibility for grants restricted to the non-profit sector, Haass said.

“Central and Northern Arizona are ideal locations to retain talent and to avoid the churn of employees that some larger tech hubs are experiencing,” he said. “Faculty, students and technology at Embry-Riddle-Prescott as well as other institutions of higher education have a unique opportunity to fuel the development of companies – both existing and to-be-formed – in a variety of exciting fields.”

Haass anticipates it will take five to seven years to see the center grow to the potential that has occurred in other rural communities. He speculates that over time, more than 100 jobs will be created through local incubation and 485 indirectly through attraction. He also predicts more than $111 million in additional taxable income eventually, because of the new job creation.

“I believe these will be among the top areas for private and public investment in coming decades,” he said. “We are forming partnerships with the Quad Cities, with regional developers, existing tech companies, and higher education institutions such as Yavapai College (YC) and Northern Arizona University (NAU). We’re also borrowing ideas from other technology centers such as Skysong in Scottsdale, Plug and Play in Sunnyvale, California and the Southwestern Colorado Accelerator Program for Entrepreneurs.

Haass earned his Ph.D. in mathematics at Massachusetts Institute of Technology. He also earned two bachelor’s degrees from the University of Wyoming, Laramie.

Prescott Mayor Greg Mengarelli wholly endorses the Center for the Future. In a written statement following unanimous approval by the Prescott City Council to set aside up to $3.7 million in existing city funds to support the project, Mengarelli said, “We recognize the vital role the center will play in the current and future economy of Prescott. We have invaluable partnerships with many stakeholders, including our four local universities and colleges. We seek to retain a much greater proportion of the talented graduates who are educated and trained in Prescott but who unfortunately have to leave to pursue their careers.”

City of Prescott Economic Development Consultant Jim Robb said of the center, “This opportunity will serve as an incubator for major high-tech companies. It will be the start of creating organically high-paying jobs for our local graduates and citizens. The proposed location near the new regional airport terminal is perfect.”

Haass praised the people who have supported the creation of the center through the last four years. He specifically cited the local governments of Prescott, Prescott Valley and Chino Valley. “It takes a village to make something like this happen. We see this as a regional resource because the employees will be living throughout the Quad Cities area. Everyone will win with this venture.” QCBN