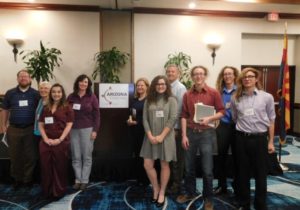 More than a dozen citizens, including several students from the Quad Cities area, echo strongly a citizens’ group recommendation that a major tax hike is needed to offset the pending fiscal crisis in Arizona schools – pre-K through 12.

Consensus, following more than three days of discussion, was that Governor Doug Ducey and the Arizona legislature must increase state funding for schools.

Prior to formulating recommendations about improving the financial base for Arizona schools, participants heard national experts and studied reports about the need to increase funding to schools to support academic proficiency in reading, writing, math, science, technology, arts and humanities. Also noted was the need to increase teacher salaries.

In 2016, a poll taken in Arizona indicated the majority of those sampled believed the state needs to spend more money on education. Of particular note was that the national average is $12,774 for per pupil spending. Arizona spends only $8,786, and ranks 48th in the nation.

Hearing these and other statistics that showed Arizona to be among the bottom tier of states for education funding, especially in non-metropolitan areas, panelists from throughout the state overwhelmingly agreed that Arizona teachers are grossly underpaid when compared to other states.

Participants also agreed that current funding formulas are unfair and inadequate, especially the differences that exist between public schools and charter schools. “In our district, funds are needed just to meet the basic needs that the state still is not adequately funding,” said Prescott Unified School District Superintendent Joe Howard.

He noted some of the actions proposed and endorsed by Arizona Town Hall participants, specifically $1.3 billion in one-time new expenditures that would increase teacher wages, develop and implement a preschool program and build and maintain schools.

Howard emphasized that participants also recommended several options by which

money could be found to support such large increases. Among those were raising the sales tax under Prop 301 from 0.6 percent to at least one percent. Also mentioned were a statewide property tax and adding a sales tax for personal and professional services. Also suggested was supporting an excise tax on energy, tourism and entertainment.

“I learned so much about how the legislative process works in funding education, said Jackson Rauch, a senior Prescott High School student council member. “I also learned that we as students need to begin voicing our opinions if we expect to solve the crisis in education financing in Arizona. We need to be ‘change agents.” QCBN