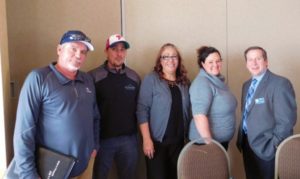 The economic impact of local events planned by the City of Prescott continues to grow, bringing new people and more dollars to the community.

The direct impact from spending on sporting events alone last year was over $2.5 million. The indirect economic impact totaled almost $6 million. Compared to five years ago, that’s an increase of more than $1 million in direct spending and $3.5 million in economic impact.

What is more, an expanded event calendar for coming months promises to be “…bigger than ever,” said John Heiney, community outreach manager for the City of Prescott.

Heiney told a crowd of local business and hospitality leaders that increased cooperation and participation from throughout the community is creating an excellent atmosphere for economic growth. The group met at the Hassayampa Inn on March 5 for an update called “Tourism Team Up.”

The combination of city-coordinated special events and sporting events from April through December 2019 adds up to more than 90.

Prescott Parks and Recreation Director Joe Baynes told the group, “The events we’re talking about today do not include those planned down around the Courthouse Square by the county and by Prescott Downtown Partnership. Those bring in hundreds more visitors.”

Baynes asked meeting attendees to spread the word that the annual city-sponsored 4th of July Fireworks Show is being moved to Watson Lake for safety reasons. For the past several years, it had been at the Mile High Mid-School Athletic Field, but drought conditions and fire danger had caused it to be postponed.

Hormann noted that tournaments and state championships “…fill our local hotels and restaurants with teams and their families for multi-day experiences.” He said because of the increasing number of events, it is likely the city will be adding more ballparks and four more pickleball courts.

Of pickleball, he said, “Our program here has become so popular that we are thinking of sponsoring a national tournament.”

“The amount of money that circulates because of all these events throughout the summer and fall is inestimable,” she said. “We know this. Other cities are contacting us, asking for advice about how we deliver so many events. They want to imitate what we do because we have been so successful.”

Linda Nichols, who for several years has been active with the Parks and Recreation Board, applauded city staff members and told the crowd, “I think it is fantastic what the city does with the limited resources they have. They are enriching the lives of all our residents and those who visit Prescott.” QCBN