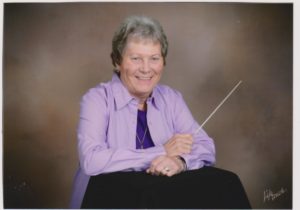 Music lovers from throughout the Quad Cities are looking forward to another season of rousing band music, especially after having been cooped up for the past three months because of the COVID-19 pandemic.

Ready to strike the downbeat to open her 23rd season, Clydene Dechert will wave her baton to coax the music out of the talented musicians of the Central Arizona Concert Band (CACB).

“I think people throughout the greater community are going to be ready for some lively music,” she said. “Our band certainly can take care of that need.”

The Prescott Downtown Partnership (PDP) sponsors several summer concerts, the CACB among them. As part of its ongoing programs to bring people downtown, PDP officials say they promote pre- and post-concert shopping, dining and entertainment that businesses offer on and near Courthouse Square.

The band performs its fall, winter and spring concerts at the Davis Learning Center on the Embry-Riddle Aeronautical University campus.

Dechert, a professional musician who has performed with major musical organizations throughout the Southwest, smiled broadly when asked how many people have attended concerts she has conducted.

“Truthfully, that would be impossible to estimate. When I think of the dozens of free public concerts the band has played at the Courthouse Square, that alone would amount to thousands over the years. That audience is not just local. I’ve had visitors from all over – even some who are international – come up and tell me how much they enjoyed hearing the kind of music the band performs,” the retired music professor said. “We get hundreds, too, at our ERAU concerts.”

Concerts scheduled by Dechert carry a broad selection of music, ranging from classical to show tunes and contemporary; and always, toe-tapping, hand-clapping versions of popular marches, especially those of John Philip Sousa.

Well-known throughout the Quad Cities area, the New Mexico native lived on ranches in the Land of Enchantment and, later, Arizona. The third generation of a musical family, she began playing the piano at age 4. As a youngster, she also was an active rodeo participant – barrel racing and bull riding. And, as a teenager, she was an African safari hunter.

Dechert earned her bachelor’s and master’s degrees from Arizona State University. She later studied percussion at the Aspen School of Music and was a member of the prestigious Aspen Festival Orchestra. The ambitious Dechert also studied classical conducting with internationally recognized conductors, including Philip Greenberg of the Phoenix Symphony Orchestra.

Almost immediately upon arriving in Prescott, Dechert made herself known to local and regional audiences. She has conducted several popular programs such as “Oliver,” “A Chorus Line,” “Damn Yankees,” The King and I,” and “A Funny Thing Happened on the Way to the Forum.”

Dechert is the principal timpanist with the Prescott Pops Symphony Orchestra. Perhaps her major contribution to community music was when she and the late Bob Boorn founded the CACB in 1997.

“We had no idea then the band would become so popular,” she said. “From those few volunteer local musicians who wanted to play band music until now, we’ve grown to a semi-professional group of 60 or so highly qualified musicians of all ages. I think we’ve created an environment of educational and artistic excellence that gives them and the audience genuine enjoyment.”

The band rehearses regularly in facilities provided by the Franklin Phonetic Primary School in Prescott Valley.

Dechert has earned many honors in her distinguished career and was inducted into the Arizona Music Education Hall of Fame in 2011.

Why do you encourage introducing music to children?

“To make them a more rounded individual.”

“This goes back to our large family gatherings at the ranch in New Mexico. It was then, and still is, Christmas.”

What would be your favorite vacation?

“A nice stay at the historic La Posada Hotel in Winslow, Arizona.”

“My mother told me, ‘It’s time to retire after you go to a state retirement meeting.’”