You are here: Home / Local News / Cobras, Vipers, Spiders and Stingrays Move into the Desert 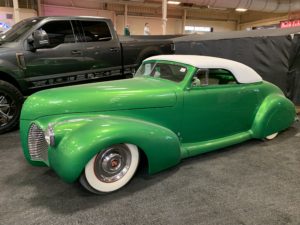 Touted as “the World’s Greatest Collector Car Auctions,” the celebrity-studded Barrett-Jackson Scottsdale event offered a week of stunning rides, from vintage Corvettes to Retro-Mods to first production 2021 series, like the Lexus LC 500 Convertible fresh off the assembly line.

The massive annual January car show also offered northlanders an almost blinding glitzy break from winter during its week-long run in the desert.

Nine collections – the most ever offered by Barrett-Jackson – included more than 180 well-preserved and maintained collector vehicles, which all sold. The Paul Walker Collection was among the most anticipated, with 21 vehicles spanning five decades. It set several auction records, including a 1995 BMW M3 Lightweight that went for $385,000. The late Paul Walker was an actor and philanthropist best known for his role as Brian O’Conner in “The Fast and the Furious” action films.

Organizers say the 2020 auction was its largest and most successful in the event’s 49-year history as a record number of bidders vied for more than 1,900 vehicles that sold for an excess of $129.7 million. More than 1,200 pieces of automobilia brought in more than $3.7 million and $7.625 million was raised through the sale of nine charity vehicles, bringing the total amount sold on the Barrett-Jackson auction block to more than $141 million.

“We kicked off our ‘Road to 50’ in Scottsdale with our foot planted on the accelerator,” said Craig Jackson, chairman and CEO of Barrett-Jackson, referencing the year-long celebration toward the company’s 50th anniversary. “Our sponsors, consignors, bidders and guests made this week’s auction epic. We hit one new auction record after another, raised $7.625 million for charity, which included the sale of two VIN 001 vehicles and rewrote automotive history with the unveil of my newly restored 1967 Shelby GT500 EXP ‘Little Red.’ As we ramp up for our 50th anniversary next year, we’ll continue to drive the excitement from Scottsdale right into our Palm Beach, Northeast and Las Vegas auctions.”

According to Jackson, the auction experienced a surge in new buyers who were after high-quality, drivable customs and Resto-Mods. “New buyers want cars that offer all the modern luxuries and technology with the classic body styles, which continues to drive the demand for Resto-Mods. As their passion, knowledge and experience with collector cars mature, their focus shifts to collecting professionally restored, matching-numbers cars, which is a trend that is keeping this hobby alive and strong.”

“This was absolutely the most phenomenal Scottsdale Auction in Barrett-Jackson’s history,” said Steve Davis, president of Barrett-Jackson. “We produced and executed the highest grossing event ever and gave guests the chance to experience the absolute exhilaration that only comes from the Barrett-Jackson experience. But what really elevated this Scottsdale Auction to the next level was the wonderful generosity of the many consignors and bidders who opened their hearts to help us raise $7.625 million for charity. What an incredible feeling to know that the collector car community is having such a positive impact on the lives of people across the country who need our help.”

Jackson says charity vehicles are the soul of the auctions. “Supporting the community was the purpose of the first event my family helped create almost 50 years ago. Over the years, we’ve supported medical research, funded education initiatives and provided money for programs that champion our nation’s military heroes and first responders. We’re proud of the funds and awareness we’ve been able to help raise. It was especially an honor to welcome GM CEO Mary Barra to the auction block be part of the historic sale of the first retail production 2020 Chevrolet Corvette.” QCBN