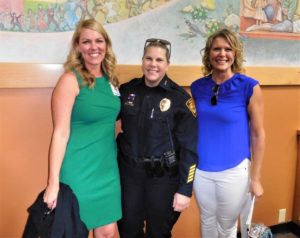 I urge people to call us on our crisis intervention hotline at 877-756-4090 or walk in at the Crisis Stabilization Units at 8655 E. Eastridge Drive in Prescott Valley.

The impact of more than a year of isolation created by the COVID-19 pandemic, in addition to job and housing losses, economic deprivation and personal and social crises, has resulted in radical increases in mental health issues.

That is what leaders of several professional health organizations in the greater Quad Cities community shared during a two-hour town hall meeting last month, sponsored by the City of Prescott at City Hall.

“As we are coming out of the worst of the pandemic, it’s important we talk about how our citizens and their families are doing,” said Prescott Mayor Greg Mengarelli.

Mengarelli introduced Amy Seets Moore, the mother of Tye Seets. In an emotional presentation, she said she felt compelled to speak out about mental health issues, which had destroyed her son’s life. She said if what she shared could help anyone else understand how important it is to seek out help during times of mental anguish, it was worth the pain she suffered when sharing his story.

Seets graduated from Prescott High School in 2012 and then enlisted in the Army, where he served in Afghanistan. Upon discharge, Seets returned to Prescott and became a firefighter. He married and was the father of a young son and daughter. His mother described how he suffered from stressful military memories and PTSD. His mental issues grew until he took his own life by gunshot March 17.

Moore said she was pleading for people who need support to seek help from professional personnel and agencies, no matter what the circumstances.

Several local authorities spoke to describe the kind of help available. Yavapai County Communities Health Services Director Leslie Horton shared data showing alarming statistics for Yavapai County regarding the death rate from suicide and drug overdose. She said that suicides among youth age 17 and younger totaled 31 last year, 18 more than the previous year. She said suicides have increased among older populations, too, more than twice as high as other Arizona counties. She also noted that overdose deaths rose from 82 in 2019 to 86 in 2020.

Spectrum Health Care CEO April Rhodes said that isolation from others had created a critical issue in the healthcare environment, and that citizens need to make an effort to connect with others.

“Behavioral health care is available at our facilities,” said West Yavapai Guidance Clinic CEO Tamara Player. I urge people to call us on our crisis intervention hotline at 877-756-4090 or walk in at the Crisis Stabilization Units at 8655 E. Eastridge Drive in Prescott Valley. We’re open 24 hours a day, seven days a week.”

Terros Health, which has several offices in the greater Phoenix area, was represented online by crisis manager Michael Lawhon. He said the Terros objective is to offer help to those in crisis at any time. In the past four years, Terros has assisted more than 10,000 people.

Nancy Gardner, program manager for the Yavapai Justice and Mental Health Coalition, told the audience that YJMHC is working to coordinate with all other local services and wants to help those in need make rapid contact by calling 928-554-8593.

Meanwhile, the Coalition for Compassion and Justice (CCJ) stressed the need for shelter and homes for homeless individuals and families. “Having a roof over your head relieves a lot of stress, and we’re trying to make that happen,” said Executive Director Jessi Hans.

Two local law enforcement leaders – Prescott Interim Chief of Police Amy Bonner and Yavapai County Sheriff’s Office Sgt. Ethan Stover said each of their respective law agencies had spent hours in training for crisis intervention awareness. They also said more and more cooperation and collaboration among all agencies is occurring to provide residents with up-to-date information about where they can get help for mental health issues.

A limited number of residents were allowed in person for the town hall, and there were an estimated 60 participants online.

Mengarelli concluded the town hall by noting that Prescott city officials will continue to stress the need for ongoing mental health programs for all ages. He said Yavapai County is fortunate to have many agencies that provide counseling, therapy and legal services to address those issues. QCBN