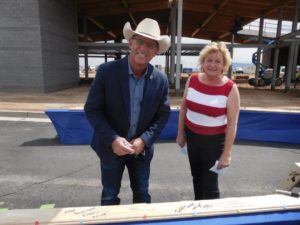 Prescott city and county officials and community leaders followed a centuries-old tradition when they signed wood beams that “topped out” the Prescott Regional Airport (PRC) terminal currently under construction.

“This ceremony marks a major milestone in construction of the new passenger terminal.  By mid-March, we’ll have the grand opening of this truly regional resource. This modern facility will serve this region for decades into the future,” he said.

Mengarelli introduced Keith Sabia, principal in charge from the Willmeng Construction Co., which is headquartered in Phoenix.  Sabia explained that the tradition of signing beams prior to their being placed began more than 700 years ago in Europe as a way of memorializing those who were directly involved. The four Douglas fir planks were signed by city, county and community elected officials and leaders and then hoisted into place atop the roof of the $15 million building.

Also present were officials from Fann Contracting in Prescott, which has handled road construction, site preparation and excavation, and other related construction activities. Almost 300 people are currently employed on the project and work for local subcontractors.

“This is an exciting day,” said Prescott City Manager Michael Lamar. “It’s an example of the progress that can be made when partners from throughout the Quad Cities work together on something which benefits all residents.”

Yavapai County Board of Supervisors Chairman Craig Brown added, “The terminal will serve the entire region for generations to come. It will help us in promoting positive economic growth and prosperity within the entire county.”

Earlier this month, the City of Prescott announced that SkyWest Airlines/United Express has been awarded a contract for three more years at PRC. That contract is for what is called Essential Air Service (EAS). It was awarded by the U.S. Department of Transportation (USDOT).

SkyWest had been awarded an earlier EAS contract in August 2018, which will expire.

Airport Manager Robin Sobotta expressed appreciation for the partnerships that will continue among the three parties – USDOT, SkyWest/United Express and the City of Prescott. QCBN