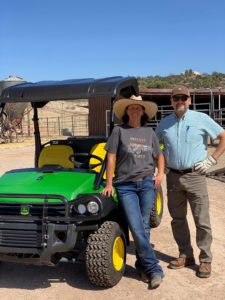 The sanctuary is home to nearly 100 senior, special needs and hospice animals, the majority of which are livestock.

It was discovered that an essential piece of equipment for the organization, a John Deere Gator, had disappeared. AGN representatives say word of the loss spread quickly through the area, which sparked outrage at the thought of a non-profit being robbed.

“People offered to help in different ways, like lending or donating equipment, offering rewards leading to an arrest and pitching in to help distribute bales of hay,” said AGN Founder and President Carrie Singer.

Three days after the equipment went missing, the Gator was found, although in barely-operable condition. According to Singer, an individual reached out to John Deere CEO John May, in hopes of assistance.

“The letter reached a top executive, who felt compelled to help,” she said. “Arizona Stotz Equipment dealers came together and each contributed to provide AGN with a 2019 HPX615E Gator, retail value of $12,000, for a total purchase price of $3,000.”

Hector Albarran, consumer products sales manager for Stotz Equipment, a family-owned John Deere dealership, was instrumental in coordinating efforts to facilitate a replacement. Hector, along with several other Stotz employees, worked together with the eight Arizona stores, each sharing in the donation of a HPX615E Gator. Tim and Genevieve Manatt of Cedar Falls, Iowa, generously donated the money to pay for the unplanned expense.

The sanctuary is home to nearly 100 senior, special needs and hospice animals, the majority of which are livestock. The theft created a hardship in the ability to distribute more than eight bales of hay a day to feed the animals.

“Stotz Equipment is dedicated to creating a better life for our families, communities and those connected to the land,” said Singer. “This upstanding and remarkable company sure lived up to their purpose, enabling a charitable organization to not only continue providing for the animals in their care but doing it efficiently with John Deere equipment.”