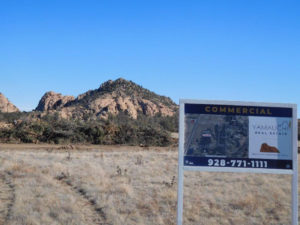 The 79.2 acres are just north of Heritage Park Zoo and across the road from Embry-Riddle Aeronautical University (ERAU).

Owned by local physician Hojat Askari, the land is now designated to have multiple uses, including a large acute care facility and rehabilitation hospital. It also will have an independent care and assisted living and memory care complex. Some medical offices will be adjacent to the other medical installations.

Other areas have been selected for a community wellness center, a one-acre food court, a possible hotel-conference center and single and multiple family homes.

All these were described by Askari during a Jan. 23 groundbreaking ceremony organized by the Prescott Chamber of Commerce. More than 200 people from throughout the community gathered for the announcement of the new subdivision.

Askari was joined by several others from his medical staff and office and by several Prescott and community dignitaries when they dug shovels into the ground to officially start the project.

Among them were representatives from United States Senator Kyrsten Sinema’s office and from United States Congressman Paul Gosar’s office. Also present were several people from the Yavapai County Board of Supervisors, the City of Prescott and the Prescott Chamber of Commerce.

Askari said the 156-bed, four-story hospital would possibly be in cooperation with Banner Health Hospital and MD Anderson Cancer Center, though confirmation of those two relationships has yet to be announced.

He also said that major hotel chains, including Marriott Hotels and Omni Resorts, have expressed interest in the hotel-resort complex.

City approval is still needed on several of the project proposals before full construction can begin, city officials indicated.

Several people praised Askari for donating approximately 23 acres from his land to the City of Prescott. Those acres are near the east boundary of the property and back up to picturesque Granite Dells rock formations. Prescott Mayor Pro Tem Billie Orr thanked Askari. She motioned to the rugged tan granite rock outcroppings, saying the city would create access to hiking trails through that scenic site.

Preparing the land for the various construction projects is going to take months. Initially, several acres within the subdivision had to be cleared and leveled. One major project is that of installing infrastructure to property where it had not existed before.

Project Superintendent Fred Lockwood from Fann Contracting told QCBN that a complete infrastructure package is now underway. He said two 16-inch water mains were being installed. One is to be connected to the Heritage Park Zoological Sanctuary area just south of Whispering Rock. The other is from the ERAU campus, which is west of the subdivision.

“A project this large will require a significant water supply, so these two mains are necessary,” he said.

Lockwood said Fann Contracting also is installing the infrastructure, which includes water, sewer, gas, electric and internet. The 32-year Prescott resident estimated it would be late July or early August before that construction is complete.

The main entrance into and out of the subdivision will be constructed at what is now the intersection of the north entrance to ERAU off Willow Creek Road. That intersection will be reconfigured as a four-way stop to give vehicles safe access.

Another exit out of the subdivision will be several hundred yards north of the intersection. It will allow vehicles to turn right only onto Willow Creek Road.

Planning for a subdivision of this magnitude has taken several years. An initial proposal went before the Prescott City Council in September 2018. That request involved a four-step round of approvals: a development agreement, a general-plan amendment, annexation of the property into the city and rezoning for all the acreage in the annexation.

In following months, city officials received multiple pages of requests that required review and approval from various city departments and officials. Askari was firm in saying that medical uses would be the primary focus for the project.

In November 2019, the city council unanimously approved the rezoning request. The rezoning changed the designation from “Business General” to “Business Regional.”

Askari is enthusiastic about the potential of Whispering Rock. He explained that he and his medical colleagues want to serve the community with the best of all possible medical resources. QCBN