You are here: Home / Community Profile / Country Doctor Celebrates a Lifetime of Memories in Northern Arizona 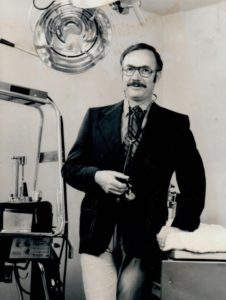 For decades, retired physician and cattle rancher George Yard and his wife, Sharon, a nurse, have impacted the medical, educational and agricultural fields of both Yavapai and Coconino Counties, directly and indirectly.

Though both had their primary careers in hospital medicine in Coconino County, they nevertheless owned and operated a large cattle ranch Yavapai County, just east of Paulden and west of Perkinsville.

Having just celebrated his 90th birthday on Feb. 28, Yard reminisced about his experiences with more than 230 close family members and friends when they attended a party in his honor at the Elks Lodge in Flagstaff.

Friends from throughout the Quad Cities area joined those from Flagstaff and elsewhere to sing “Happy Birthday” to the country doctor. They also heard close friends tease the Yards in ways that only occur when genuine respect and friendship is involved. A sizable number of them made the claim, “Dr. Yard delivered me,” or “Dr. Yard delivered one of my kids.” What Yard likes to brag most about, though, is that he delivered all his grandchildren.

It is true. George Yard delivered them and thousands of other babies during those years that he practiced medicine in Flagstaff and, later, in Williams. In 1960, Yard was honorably discharged as a captain from Army Medical Corp after having served in Germany. He began a family practice in Flagstaff. The population then was only 18,214. At that that time, six physicians were headquartered in the little town. Family doctors were busy with every type of medical issue.

Never Quite the ‘Boy Next Door’

A native of Bisbee, where he lived on a ranch-farm, Yard became an Eagle Scout and went to high school. In 1948, Yard decided he wanted a look at the bigger world. He was one of two outstanding Bisbee High School students to receive a Phelps Dodge scholarship to attend the University of Arizona.

As his grandson, Charlie Moody, described to the crowd at the birthday party, “Grandpa was known for his campus shenanigans. He and his fraternity buddies crept into a sorority house, stole all the toilet seats, took them to Old Main on [NAU] campus and strung them up for everyone to see.”

A pre-med graduate at the University of Arizona in 1952, Yard then was admitted to Northwestern University Medical School in Chicago. In just two years, he received his bachelor of medicine degree, “And I am quite proud of that BM,” he said with a grin. In 1956, he earned his doctorate in medicine and soon after, joined the military.

Others who talked about Yard during the celebration were emphatic that Yard, while an excellent physician, was not the traditional “white coat and necktie doctor.” In contrast, he wore cowboy boots, jeans and western shirts, and of course, a cowboy hat – all a reflection of his youth when he was a champion bull rider.

Through the years, as Dr. Yard became involved in the greater Flagstaff community, he joined the State Board of Medical Directors. He served from 1973 to 1977 as president of the Coconino County Medical Association. For a while, he served as a part-time physician at Northern Arizona University (NAU).

He was involved in multiple community organizations, too, such as the Republican Party, Flagstaff Symphony, Turquoise Ball and as chairman of the Community College State Board. In fact, he was a primary leader in the founding of Coconino Community College.

Yard was well-known in the greater community, where he was joined by notable community leaders like the late attorney Douglas J. Wall, the late former NAU president J. Lawrence Walkup, and longtime physician George Hershey, 82. They and their community colleagues formed close bonds, and vacationed and socialized together. In fact, Yard reminisced at the party, “The one guy I really wish was here – Doug Wall. He made a real difference in my life.”

Fellow doctor George Hershey teased the birthday crowd, “I’ve got a lot of stories I could tell you about pranks George pulled on me and other doctors – but there are too many kids here.”

When the Yards moved from Flagstaff Medical Center to Williams so he could become a clinic physician at Williams Hospital, the Yards bought a cattle ranch, the Y Bar D, south of Williams near Perkinsville and Paulden in Yavapai County. They retired in 2002. Yard, then 72, built what he called their dream house, where they lived adjacent to the Verde River until 2019. He and Sharon raised crops and cattle, and “built enough fence to corral any herd John Wayne ever ran,” he said.

Now, the Yards live in Flagstaff, near many of their children and grandchildren. “I still have my horse, too, though getting in the saddle is a bit more than I want to do now.”

Sharon laughs, “Heck, getting in the truck is a chore for you anymore.”

“No doubt, Christmas, because of the spirit involved.”

What is the funniest thing you ever did?

“When I was at the UofA [University of Arizona], one night my frat brothers and I stole a pig from the university farm. We greased it up really good and then at 2 in the morning, we took it to the Kappa Kappa Gamma house and turned it loose in the living room. We sat on the lawn and roared as the girls tried to catch it.”

What is your most memorable experience?

“Taking a pontoon boat trip down the Grand Canyon with my wife. My son, since he was a river-runner, made arrangements and accompanied us in another boat.”

How seriously should we take the coronavirus epidemic?

“People need to treat it as they would any other serious disease. Maintain good sanitation practices, wash your hands regularly with soap, avoid unnecessary exposure to large crowds, and if possible, stay away from areas that have been contaminated.”

What advice would you give a young person starting a medical career?

“If you decide to make medicine a career, you must make it a full life, multifold commitment.” QCBN