You are here: Home / Local News / Crushing It 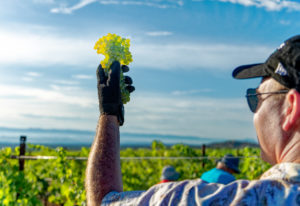 In just 10 years, the Southwest Wine Center (SWC), owned and operated by Yavapai College in Clarksdale, has grown from a raggedy one-acre field to what is now a groomed 13-acre vineyard that offers a comprehensive, hands-on educational experience in all aspects of the winemaking business.

Even better, it has positioned the SWC as a premier fully functioning and profitable business within the college.

This year, the SWC produced 2,400 gallons – 1,000 cases of award-winning wine in 13 different varieties and 27 distinct styles.

Michael Pierce, director of viticulture and enology at the college since 2014, told Quad Cities Business News that $175,000 in sales revenue was returned to the college this past year. Those funds are used to support and expand the program.

Not only have wine acreage and production facilities grown, so have enrollments. When the SWC first started, only a few students enrolled. “They had no idea what the future could be in the wine industry in this area,” said Pierce. “But now, we have more than 100 students enrolled in all phases of viticulture and enology.” Some students seek just certificates. Others seek associate degrees, which require at least 63 credit hours.

Surprisingly, the age cohort for those enrolled in courses this fall at the SWC does not parallel that of more traditional students. The average age of students is 48-and-a-half years old, according to Pierce.

“Our students are involved in all phases of the wine industry. Many graduates have become vineyard managers, winemakers, tasting room associates, wholesale distributors and marketers. Some have even started their own wine businesses, or want to,” Pierce said.

Because enrollment growth and interest in the program has been so intense, Yavapai College President Lisa Rhine and the governing board and the administrative staff have given the go-ahead to add a second fermentation track to brewing technology in the near future.

Currently, one part-time and two full-time employees work at the SWC. More will be hired later.

“The viticulture and enology programs at SWC on the Verde Valley campus are two of our signature programs,” said Rhine. “To be able to provide such unique programs to our community that has embraced the wine industry is outstanding.”

“I’m especially gratified the rest of Arizona – and in fact, the Western region of the country – has finally discovered us,” Pierce said. He emphasized that the larger Verde Valley community came together to make the program possible. “Volunteers helped plant the vines and pick the grapes. Financial contributions from residents and the wine industry bolstered program growth.”

As a consequence of the growth, several wines created at the SWC have won state and regional accolades for excellence. This year, students created a barbera in a tawny port style. Two years earlier, they developed some distinctive port styles such as tempranillo, petite sirah and a fortified malvasia blanca.

Strong Regional Reputation
Pierce, who, along with his father, graduated several years ago from the Washington State University Viticulture and Enology program, said the wine industry throughout the Verde Valley is thriving and gaining both national and international recognition.

“We’re proud that the past few years, grapes we grow and wine we produce in the Verde Valley have developed a strong regional reputation,” he said. “This area has become a destination for those seeking quality wine. Thousands of people wander into the Verde Valley and Red Rock Country. They create visibility and appreciation for the many wineries in the area.”

The winery program and center started with the donation of one acre from Merkin Vineyards. “Now look what we have – wine industry and community members working together creating an academic program, developing workforce training and all the while, supporting the local economy,” said Pierce. “The Verde Valley Wine Consortium and Tom Schumacher led the concept from the beginning.”

Explaining that land altitude – some 3,000 undulating feet – and year-round weather conditions and fertile soil are ideal to grow grapes, Pierce said he anticipates major expansion of the industry.

Pierce and Dr. Tina Redd, Verde Valley YC campus dean, bantered back and forth about the differences between wine from Arizona and wine from The Willamette Valley area in Oregon and Washington. Redd, who lived in Washington before accepting the position at YC, described wine from that region as “soft, calm, mellow.” In contrast, she said she thought Verde Valley wine was “bright, crisp, spicier.”

Pierce surprised folks when he said the growing season in the Verde Valley is shorter in Arizona than in Oregon and Washington. Even so, there is not as much sunlight in the Pacific Northwest, he said.

Recently, the college received two major grants to support the program. One was from the National Science Foundation to help buy equipment. The other was from the Arizona Department of Agriculture and will be used for an analytical study of wine grapes and their requirements for matters such as soil, water, climate and related agrarian factors.

The SWC is a fully accredited and licensed facility. It has a TTB basic permit, a series 13 liquor license and a county health permit for the tasting room.

During this interview, Prescott couple Dave and Brenda Favier visited the SWC. They toured the expanding facilities and saw dozens of expensive imported seasoned oak barrels that are used to age the wine.

They asked Pierce, “Is there fundamentally any difference in the taste of between a good box wine and the wine you buy in bottles at the stores?

He said, “Not really. The fundamental differences in taste between the two packaging processes is by and large imagined if the wine has been properly produced and aged.”

He then invited them into the attractive Tasting Room where they had an option of selected wines from many of the award-winning varieties.

The SWC Tasting Room reopened Sept. 10, and is open from noon to 6 p.m., Thursdays through Sundays. The address for the SWC is 601 Black Hills Drive in Clarkdale. QCBN