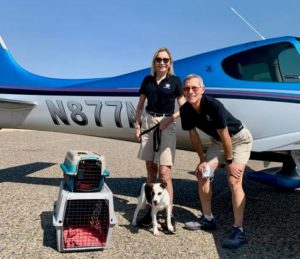 A puppy had been badly burned and needed immediate medical care, according to the urgent online post.

It was Saturday morning, March 6. Recently-retired American Airlines Boeing 787 Captain David Weeks was at home in Flagstaff, enjoying the sound of the breeze through the pines on this unusually warm winter day when he read the message on the Pilots N’ Paws discussion board. The pup, six or seven months old, had been stabilized at a small remote clinic, but required an emergency flight to Scottsdale for extensive long-term treatment.

And with that, he and his Cirrus SR22T four-seater were headed toward the solitary northwestern New Mexico airstrip that has become a familiar landing site. “They don’t have a control tower; you just look both ways and go.”

Weeks, a seasoned pilot based out of Phoenix for much of his career, is used to flying commercial passengers to international airports in Europe, Asia and South America. These days, he is thrilled to be piloting a small plane again.

“I missed it,” he explained. “I came up through general aviation, was a flight instructor, flew air taxi, worked for an air ambulance in the ‘80s and was a demonstration pilot for Gates Learjet.”

Weeks is part of a network of volunteer pilots, connected online through Pilots N Paws, a non-profit organization that coordinates transport requests for animals in need. He retired in October after flying for 34 years. “I knew retirement was coming up and we [David and his wife, Nancy] talked about buying a light aircraft. We wanted to do volunteer flying and already knew about the organization.”

Much different from flying into New York’s JFK International Airport “for the 500th time” or “being number 27 for takeoff at Dallas/Fort Worth during rush hour on a Friday afternoon,” Weeks says it’s a nice change to go to smaller airports in the Four Corners region near places like Rifle, Colorado, Park City, Utah, or Wickenburg.

“David has to research ahead of time to find what canyons to fly through without going up over the tops of mountains,” said Nancy, who often joins him on these flights to Shiprock to pick up the precious cargo and then take off to locations across the Southwest where animal shelter volunteers are waiting for the delivery. “Their lungs may not be developed,” she explains about the rescue puppies they transport. “We don’t want to take them to a high altitude over 10,000 feet because the plane is not pressurized. We’ve got to protect those little lungs and little ears.”

Puppies and pregnant mama dogs are frequent clientele, as well as dogs between 1 and 2 years old. Affectionately known as Rez Dogs, most are descendants of working dogs from sheep camps. “We get a lot of herding dogs – great Pyrenees, huskies shepherds, heelers – you’re never going to get a purebred,” said Hannah Browning, who volunteers for Turquoise Paw Rescue, an animal rescue operation and transfer hub that serves the Navajo Nation. “If someone adopts one and does a DNA test to see what kind of dog it is, it’s a mix of five to 50 different breeds. You never know what you’re going to get.”

Yvonne Todacheene and her husband, Izzy A., have been rescuing reservation animals and operating Turquoise Paw for more than a decade. “We started in 2006 with just a few animals but at the time there was nowhere to really take them,” she said. “I didn’t start keeping records of the animals we rescued until 2014. The records from 2014 to 2019 show that we rescued close to 10,000 animals during that time period. In 2020, we decided it was time to file for 501c(3) status since Hannah came on board and was able to help with the arduous task of moving the animals out.”

Last year, Turquoise Paw rescued, fostered or transported 3,048 animals to new lives off the reservation. So far this year, the operation has processed about 1,150 animals.

Todacheene and Browning may drive hundreds of miles a week rescuing animals – mostly canines. They commonly pick up boxes of puppies or kittens left on the side of a highway or at a gas station. Sometimes they get a call that a dog has been hit by a car and is alone and injured on the side of a road, or a female has given birth to a litter in a hole she dug by a dumpster. Sometimes their condition is grave or advanced, like an extreme infestation of botflies. With limited resources, difficult decisions need to be made.

“These dogs kind of live in packs. They are very dog friendly. A lot of times, they’ve never been touched by people, never been in a vehicle, never been indoors or fed from a dish,” said Browning. Despite this, she says, most of them make loving pets.

The problem of homeless dogs is as massive and layered as the ancient rock monuments that dot the reservation. Browning says there are only two or three veterinarians who serve the entire Navajo Nation, and with the high poverty rate, most families can’t afford medical expenses for their pets. “It’s unrealistic for them to pay for veterinary costs. A lot of non-profits do these clinics. Soul Dog Rescue drives down almost weekly from Fort Lupton and spays or neuters 70 to 150 animals in a weekend. They’re doing it, we’re doing it and others are doing it, but the waitlist we have is over 400 names long. Soul Dog’s is over 1,000. Dogs can have two or three more litters before we get to them at the rate we’re going,” she said. “We need funding, vets and facilities. There’s a huge lack of resources.”

Todacheene is grateful for the Navajo Nation chapter houses and various churches and business that allow clinics to use their facilities for spay and neuter sites. She bases Turquoise Paw Rescue’s philosophy on the Navajo culture belief that Dine’ people are stewards of all living things – the earth and living creatures.

Neither Todacheene nor Browning receive a paycheck for their work or even get reimbursed for gas in their vehicles. Todacheene is a caretaker. Browning is an event coordinator who works nights and weekends remotely. Both foster the animals until they can get them to a shelter or a forever home. At her residence in Farmington, Browning takes on the “bottle babies,” the ones too young to feed themselves. Sometimes, it’s a whole litter, which her personal rescue dogs don’t seem to mind. Todacheene takes the rest to what has become known as “The Farm,” her land in Shiprock, where she has about 15 outdoor kennels.

“The animals are safe and warm and fed until we can move them to a safer, better place,” said Browning. But sometimes that never happens and the tasks are overwhelming. The women coordinate with 70 to 100 shelters on a regular basis and about 10 to 15 pilots. “Everybody meets the Turquoise Paw volunteers at the Shiprock airport. Sometimes we’re the only airplane, sometimes there are three or four others,” said David.

David and Nancy Weeks fly in once a week with a mostly empty fuselage and fly out with crates full of dogs. “The most we’ve had is 15, with multiple puppies in some of the crates,” said Nancy. “Usually they are very quiet on the flight. I think they are terrified,” added David. “They might whine for a little while, but then they seem to go catatonic.”

Turquoise Paw hosted its first spay and neuter clinic last month. In four days, volunteer veterinarians performed surgery on 178 dogs and cats, and administered 1,500 vaccinations. One hundred and one animals were put into rescue homes. Services were offered for free, paid for with $4,000 in donations raised through a GoFundMe page.

“We are doing what we do because we love the animals and we are passionate about the animals,” said Browning.

David and Nancy also are animal lovers and have their own rescue dogs. “It’s very hard not to want to take the Rez Dogs home,” said Nancy, who retired from a career in investment management. “It’s so much fun, the dogs are so cute and it’s wonderful to know they are going to better lives.”

“We’re in a position to do this as a charitable contribution and I love flying light aircraft. It’s just about the perfect charitable work,” said David, who also is involved with Angel Flight, an emergency transport network for humans and LightHawk, an environmental conservation nonprofit that requires aerial photography.

“I’m so proud of David,” said Nancy. “Within a month of his retirement, he found a way to combine his love of flying with doing something meaningful.”

And that “burn baby,” as Browning once called him, now goes by Sage. “The doctor says he is eating and wagging his tail and the fluids are helping him a great deal. The vet staff has fallen in love with him,” Browning assured Turquoise Paw followers on Facebook. “Sage’s vet bill is continuing to be very costly. We know he is worth it but we could really use the help covering his expensive treatments.”

To make a donation to Turquoise Paw, visit the Facebook page at facebook.com/TurquoisePaw/ or send a check to Turquoise Paw Rescue, P.O. Box 4707, Shiprock, NM 87420. QCBN