You are here: Home / Tourism / Discovering the Hidden Royal Treatment on Princess Cruises 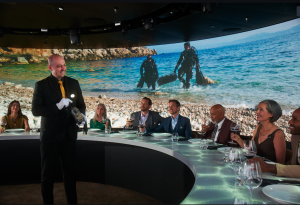 Cruise line offers a 360 Experience and secret menu for those who know how to find it.

At 11 a.m. on a winter morning in sunny Southern California, journalists from New York City, Los Angeles and Flagstaff converged to review Princess Cruises’ 360 Experience. The cruise line had launched the exclusive culinary adventure only weeks before in November.

Secret menus have become a phenomenon where fast food and high-end restaurants have unadvertised selections that guests discover by word of mouth. Princess Cruises has taken that to a new level with the 360 Experience. Like a secret menu, Princess Cruises does not advertise the 90-minute experience, and if guests want to uncover the hidden menu and wine pairings, they must try them for themselves. Princess hosted the journalists to help spread the word but asked them not to give away any special surprises.

After complimentary cocktails in one of the ship’s specialty restaurants – the only part of the event that journalists were allowed to photograph – a woman in a long, sleek, sequined dress appeared. As she walked toward the group, the musician played a classical version of the Love Boat Theme on a finely tuned violin. The guests, limited to 20 for each occasion, followed her in Pied Piper fashion to the entry of the 360 Experience venue disguised as an emergency exit.

The undercover 360 Experience is an invitation-only affair offered as a surprise to suite-category guests sailing on Discovery Princess and, as of this month, Enchanted Princess. Producers of the 360 Experience designed it to capture all the senses – even touch – in a culinary surround-sound, IMAX-like, personalized VIP event.

After the journalists and others entered the cloaked venue, servers directed them to assigned seats on a circular dining counter. All faced the center of the round-shaped room where a master of ceremonies/sommelier led them through seven courses of perfectly-plated gourmet Mediterranean food and paired libations. Throughout, a bevy of professional servers placed and poured unobtrusively.

And, as one might imagine, servers impeccably synchronized each of the courses featuring local ingredients and wines with stories and interviews with artisans, growers and vintners filmed at the destination. A fictional Princess Cruises seafarer knitted together the stories as if sharing from her travel journal. Actress Brooke Shields portrayed the traveler who takes 360 Experience guests along on her journey of discovery. The storytelling, evocative images, sounds, fragrances and, of course, tastes and touch immersed guests into the four Mediterranean cultures. Princess Cruises called it “the most epic experience ever offered.”

“Being gluten-free, I sometimes miss out on certain plates when fine dining. However, this was not the case with the 360 Experience,” said Mary Farah, who writes about finding the best gluten-free places while traveling at Along Comes Mary. “I got to enjoy everything that the rest of the guests did, including a pasta course. Not only is it an ‘extraordinary experience,’ but Princess has gone above and beyond to ensure that all who take this culinary voyage can enjoy every aspect of it.”

Farah was one of four International Food Wine and Travel Writers Association (IFWTWA) journalists who gathered for the exceptional media event. They included IFWTWA Board members Amy Piper and Stacey Wittig and general members Farah and Lorena Lopez.

Lopez, who publishes Luxury Solo Travel, commented afterward, “The 360 experience made me feel like I was immersed in a luxurious full sensory adventure of delightful tastes, sights, smells and sounds that every solo traveler needs to experience!”

“When taking in the 360 dining experience on the Discovery Princess, expect the unexpected,” said Amy Piper of Follow the Piper travel blog. But, true to form, the East Lansing, Michigan writer remained tight-lipped about the special surprises.

360 is currently available exclusively for guests booked in suite accommodations on Discovery Princess and Enchanted Princess or for guests sailing on the Discovery Princess or Enchanted Princess that book a future cruise with suite accommodations on any Princess ship, including Princess Premier, at non-cancelable rates. Guests may also gain invitation access from participation in specific “VIP” casino gaming and retail event sailings. QCBN