You are here: Home / Business / Disinfecting in Hopes of Reopening the Navajo Nation 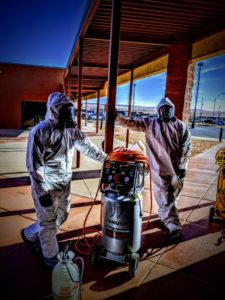 As the delta variant spreads, two young men from Tennessee continue to fight the coronavirus with deep cleaning and deep caring.

As medical experts and scientists battle COVID-19 and its variants, some consider the newest battle to be coronavirus fatigue: a disinterest in wearing masks, social distancing, sanitizing and practicing other public safety measures following the many months of staying at home and avoiding public gatherings.

One business armed and fighting that war is Southern Solutions Environmental (SSE). Two cousins from Tennessee began this small decontamination startup in November 2019, just before the pandemic broke out globally. They moved their company to Window Rock on the Navajo Reservation last June, with no business contract in place and no expectations about being paid for their services.

Ike Hawkersmith, 27, and Collin Anderson, 26, are SSE’s field generals. They also are warriors on the front line in the battle to wipe out infectious germs in public parks, museums, jails, police buildings, government vehicles and anywhere people can’t work from home on the Navajo Nation. Their uniform is a HAZMAT suit. Their weapon is Deacon7, a disinfectant commonly used in the agriculture industry.

“It kills coronavirus in under 60 seconds,” said Anderson. “It’s safe for all forms of contact. After eight hours, it breaks down into water and evaporates.”

The chemical disinfectant is made by Sandia Labs operating out of Scottsdale.

‘Brothers’ on a Mission

Hawkersmith and Anderson grew up together. “We are like brothers,” said Anderson. “We went our separate ways in life and did our own thing, but life brought us back together just before the pandemic. We saw what was coming in reports out of Wuhan [China] in November 2019. “We decided it was time to launch and we refitted the business for the inevitability of what was about to happen.”

Hawkersmith’s dad was an environmental scientist who died suddenly in a bike accident two years ago. Ike inherited his environmental cleanup services company. Meanwhile, Anderson was in the army as an infantry soldier with the Tennessee National Guard. During his six years of service, he pursued his interest in medicine, becoming an EMT and nurse. Not long after earning his nursing license, COVID-19 hit.

The business partners were following the news about coronavirus hot spots in big metropolitan areas like New York City and Los Angeles. But the hot zone that really caught their attention was the one bubbling up in the middle of the desert. “The Navajo Nation was being disproportionately affected,” said Anderson.

Factors making it hard to control the virus there, he said, included the lack of running water and electricity in many Navajo homes, as well as cultural traditions that favor large family gatherings and tight-knit communities. “We talked to the Navajo Area Indian Health Service incident commander at the time and he told us he needed people out there. They didn’t have any money, but if we could help, they needed it.”

SSE settled in the Chinle area for its base of operations and began doing a lot of volunteer work in June 2020. As the illness took off, Hawkersmith and Anderson began the challenging and potentially dangerous job of decontaminating spaces across the reservation with the goal of slowing of the spread. SSE was taking on other jobs in the Four Corners region to pay employees and cover costs. In the process, the company hired locally and at one time, had 112 employees.

Anderson says the need to help was bigger than the business. “We call it human-centered capitalism. The bottom line shifts. It’s more important for us as an organization to help people. Sometimes, that means cutting out profit and overhead. We’ve always had these values, but we were definitely influenced by the pandemic. People are really suffering and now is the defining moment to make sure people are taken care of.”

The CARES Act offered financial relief last fall. With money made available through the U.S. government economic stimulus bill, SSE was awarded a contract with the Navajo Nation that lasted until the end of the year. “It was very rewarding after months of volunteering with no thought of funding.”

Medical leaders say COVID cases are on the rise in all 50 states and the District of Columbia as the highly contagious delta variant rapidly spreads across the country and the world. The mutant strain, also known as B.1.617.2, originally surfaced in India and is now on the Navajo Nation. The first case was reported in late June.

“The case count has been picking back up over the past couple of weeks,” said Anderson. “It’s a shame to see. I believe it’s probably the influx of the delta variant. In June, 20% of cases in the U.S. were caused by the delta variant. Now, the majority of new cases are being attributed to the strain.”

In Yavapai County, epidemiologists have received one notification of the delta variant so far; however, health officials say only a sampling of positive test results are submitted for genomic testing throughout the state.

Yavapai County Community Health Services Public Health Coordinator Terri Farneti says the symptoms are slightly different from the original virus. “It seems more like a bad cold. Many people could think it’s just a cold and may not seek testing for COVID, yet they are very contagious. With the easing of mitigation measures of physical distancing, mask wearing and the increase in large gatherings, many people are getting infected.”

With the resurgence, the SSE team is as determined as ever to continue to wage its attack on the deadly virus. The company’s workforce currently ranges from 15 to 20 people, ages 26 to 38. Anderson says they have been working impossibly long days, fumigating and flushing the disinfectant through ventilation systems to bombard every cubic inch of the buildings they visit.

“It seems like my day hasn’t ended for the past 17 months,” he said.

Many of the facilities they clean have not been significantly updated or built since the ‘80s, ‘90s or early 2000s. “They have diminished airflow quality. These are little hives where viruses like the coronavirus and hantavirus can live and not be expelled where they can disintegrate outside,” said Anderson. “At the end of the day, the viral load in these buildings is rising until someone goes in and cleans it out. Disinfecting these places is of utmost importance to lower the chance of exposure to free-floating particles of virus.”

Currently, SSE is not under contract with the Navajo Nation; however, the team is working to refine its operations while training and preparing for a large decontamination push through this fall and winter. This summer, they have created a new tool to help them. The Coronavirus Decontamination Status App identifies every location they’ve disinfected, down to specific buildings.

“I would not be the first to say we do a lot of navigation by landmark on the reservation. There are not really addresses and named roads. Being able to know where each building that we’ve cleaned is located is a key function to preventing exposure events,” said Anderson. “We now have a big map and database of every facility we could find on the Navajo Nation from southern Utah to Alamo, New Mexico, southeast of Albuquerque. It is one of the most extensive maps of Navajo tribal facilities. We wanted to make sure we could provide this to the nation for use now and into the future.”

Besides their app invention and decontamination work, SSE has a significant wood-cutting and wood-hauling project along with a water and food delivery project. “This is all in the name of relief and recovery. We knew we still had resources, people and motivation to continue to help out,” said Anderson.

Today, Hawkersmith and Anderson live in Farmington, New Mexico. “This is a place we have set down roots. We are aiming to be here and help out any sort of underserved community,” said Anderson. “The pandemic brought us here. I don’t see us leaving the area any time soon.” QCBN