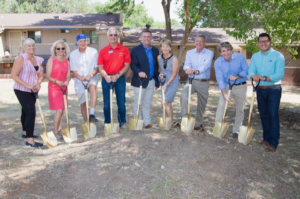 More than $300,000 is being contributed by generous donors to help end homelessness in the region.
Unprecedented cooperation among more than 50 contractors, vendors and suppliers, led by Dorn Homes Owner and President David Grounds, is resulting in construction of two lodges – residential homes entirely dedicated to housing for otherwise homeless people in the Quad Cities area.
Groundbreaking for the two new homes was led by the Coalition for Compassion and Justice (CCJ), which earlier had purchased the property at 226 South Rush Street. CCJ made it available for what is being called a “Second Chance Housing Program.”
During groundbreaking ceremonies July 29, CCJ Executive Director Jessi Hans told the crowd of more than 75 community leaders that originally, CCJ had hoped to conduct a capital campaign to fund construction of the homes. “However, because of the generosity and the leadership of the local building community led by Dorn Homes, these houses now are gifts to CCJ. They will help us fulfill our recently redefined mission – ending homelessness in our community. Because of this project, we are able to transform human lives.”
Addressing the crowd, Grounds explained the project was a visible extension of the Dorn motto of “Dorn Cares.” He said he was humbled to be involved in a meaningful and life-enriching project for homeless community members. “This will give them hope and dignity,” he said.
The two lodges were designed to accommodate four to six individuals in a four-bedroom, two-bathroom home. Each home has a large communal kitchen, dining and living area to be shared by occupants, along with a library and a den/office space. Each bedroom has a separate entrance and patio.
The 1,472-square-foot, single-story lodge floor plan was designed by Prescott architect Carol Russell. “It is the fulfillment of a great desire, to see the beginning of the end of homelessness,” said Russell.
Hans explained that rooms in the lodge will cost $300 a month, which includes utilities. She made clear that the housing is for adults. The collective monthly rent from each lodge then will be placed into a CCJ fund and used to build more homes for the homeless.
Hans praised Grounds and Dorn Homes for bringing together the diverse group of contractors, vendors and suppliers who are contributing to the project with materials and supplies, labor or cash. She expressed gratitude to all, saying, “This support speaks to the generosity of our community.”
Prescott Mayor Greg Mengarelli said he was not surprised at the generous support of all the partners. “That’s just the kind of community we live in.”
Four More Lodges in the Future
Dorn Homes Vice President of Sales and Marketing Jim Gunby told Quad Cities Business News that construction was beginning the minute the groundbreaking ceremony was over. He said he anticipated the two lodges to be completed by mid-winter.
The estimated cost for each lodge is approximately $150,000, or $300,000 for both. The figure does not include the land.
Gunby pointed out the property owned by CCJ on which the lodges are being built is large enough to add four more lodges. He said he and his colleagues and partners fully anticipate that additional lodges will be constructed as soon as feasible.
Dorn Homes has been constructing homes in the Quad Cities and Central and Northern Arizona for 50 years and is considered the region’s largest homebuilder.
Mary Bauer, immediate past president and current first vice president of the CCJ board of directors, explained the transition in CCJ’s mission was the result of intense deliberation by board members. She said the board believed the importance of putting people into affordable housing will do more to solve homelessness, a major social issue, than anything else CCJ could do. “We are blessed that Dorn Homes and the partners they brought together agree with us in meeting this mission. All of us owe all of them our gratitude.”
For more information, contact CCJ at 928-445-8382 or visit Yavapaiccj.org. QCBN