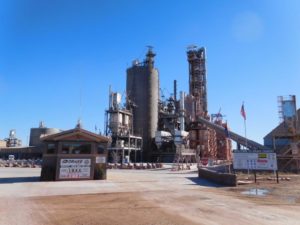 The forthcoming multi-million-dollar expansion of the Drake Cement plant has an interesting side effect, as a more than a century-old Cedar Glade Cemetery must be relocated.

Currently, the cemetery, which has 89 graves of pioneer families from the surrounding area, is located in what is virtually the middle of the nine-year old cement manufacturing plant.

David Chavez, Drake’s vice president for environment, health and safety and compliance, said the expansion plans are such that the cemetery is in the path of a planned new grinding mill, new shop, two cement storage silos, and a one-million square-foot storage building.

Chavez said executive management at Drake knew of the cemetery when it acquired the private land just 10 miles north of Paulden. He explained original planning began in the late 1990s. The parent company of Drake, which is in Peru, identified the current site is estimated to have no less than a 100-year supply of limestone, the prime ingredient for cement. In 2004, construction began. In June 2011, the newest cement plan in Arizona was opened.  It is considered one of the most technologically sophisticated plants in the United States.

From the beginning, plant officials knew about the Cedar Glade Cemetery. It was identified through Google Earth Satellite imaging. At the onset of building the production plant in 2004, with approval from federal, state and county authorities, the cemetery was isolated with a chain link fence to protect gravesites from any construction intrusion.

Many of the 89 identified graves – nine female, 80 male – have tombstones and other identifying markers. They, too, will be relocated.

Drake executives, with approval from and cooperation with Arizona Health Services, the Arizona State Museum and Yavapai Superior Court, have arranged to have Statistical Research, Inc., from Tucson, administer the actual relocation. Chavez said every effort will be made to recreate the same configuration of the historical cemetery at the new site, south of the existing production plant.

Much that is known of the Cedar Glade Cemetery is the result of a research effort conducted by the American Pioneer and Research Project. A website created by historian Neal DuShane describes in detail the origin of that cemetery and another one named Puntenney Cemetery just south of the cement plant. DuShane and his colleagues worked closely with Drake officials when the plant was being constructed to ascertain that gravesites were not disturbed. More information is available at apcrp.org/Drake_Cedar_Glade.

Chavez emphasized, “Selected personnel will manually excavate the individual burials. All grave markers and above ground memorial objects will be documented. The same is true of all human remains and associated burial artifacts.”

He also noted that as much as possible, survivors and family members of those interred at the Cedar Glade Cemetery have been notified of relocation plans. He said several families have come forward to support the relocation.

“We are making every effort to inform anyone connected to the current cemetery of the relocation plans. I speak for the entirety of the Drake Cement organization when I say every phase of this process will be done with focus upon dignity, respect and reverence,” Chavez said.

He indicated relocation would likely begin in April.

Karen Otis, Drake’s administrative/community involvement coordinator, told QCBN that in the nine years since it opened, the plant has enjoyed moderate growth. When the plant opened in 2011, it had 85 employees. Otis said 110 people are now employed. The company continues to seek workers trained in all trade skills – mechanics, electricians, heavy equipment operators and the like.

Most employees are from the immediate Paulden-Chino Valley area, with others from Prescott, Prescott Valley or adjacent communities.

The plant has the capacity to generate up to 660,000 tons annually. The limestone, from which the cement is made, comes from a nearby quarry.

Otis affirmed what Chavez had mentioned – that plant expansion likely will begin in the summer of 2020 and continue through 2021.               Over the long term, she said, Drake will provide dozens of new high quality manufacturing jobs. That will positively impact the economy of Central and Northern Arizona. She noted that Drake’s high capacity rail switching facility, linked to the BNSF mainline railway, has the potential for development by offering other potential industries access to raw materials and distribution capability to nearby I-40 and U.S. 93 highways.

“We at Drake are committed to being good neighbors and part of the Quad Cities community. All personnel – from executive and management staff down through the newest employees – are urged to be active in and support the communities where they live.” QCBN