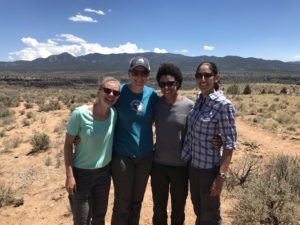 “Dreams come true if you have the courage to pursue them.”

The searing flash of flames, the ground-shaking vibration, the deafening roar of engines – witnessing a space shuttle launch from Cape Canaveral, Florida, is not something easily forgotten, but for Lauren Edgar, it is the stuff dreams are made of.

The then-second grader, who came to visit her grandmother in Florida, left her vacation with more than warmth in her heart. Little Lauren’s imagination was on fire. “That moment was pretty significant for me – the realization that there were people on board and they were leaving this planet.”

Lauren began to wonder what else was out there, and thus began her own countdown to a career in space exploration.

A few years later, Jessica Watkins, growing up under the starry skies of Lafayette, Colorado, decided she wouldn’t be limited by Earth’s boundaries either. “I wanted to be an astronaut since I was about 9 years old,” she said, “because of the desire to explore and an interest in planets, Mars in particular.”

In the same decade that Lauren and Jessica were born, Sally Ride was the first American woman in space. There weren’t a lot of women who had gone where these little girls wanted to go, but dreams thrive in a place where logic and doubt have no power.

“By their very nature, dreams aren’t practical, and neither are they achieved by playing it safe,” writes author Marc Guss in “Instincts of a Talent Agent: Entrepreneurial Takeaways from an Industry Insider.” He says, “You are your own best risk. The time for practicality comes later, when you’re taking your first steps toward success, not when your dream is still gestating.”

Lauren and Jessica both developed a passion for geology and followed similar paths through grad school. The two were guided by the same advisor at Caltech for their postdoctoral research.

And some might say the gravity of their passion for rocks and space pulled them together in Hawaii for a planetary volcanology workshop.

And then, like a dream, their stars aligned again, both called to work on the Curiosity Mars rover, investigating ancient sedimentary environments that might have been habitable at one time.

In 2019, Jessica arrived in the rocky, moon-like terrain north of Flagstaff as one of six women who made up the astronaut class known as the Turtles – it’s an astronaut tradition that your group is named by the one that comes before you – and there was Lauren to greet her.

Lauren, a research geologist with the USGS Astrogeology Science Center in Flagstaff, was selected to train Jessica’s NASA astronaut candidate class about basic geology. “Jessica had insider knowledge, but she hadn’t been to the sites before,” said Lauren. “She is very level headed, easy to work with and a great teammate. She has the right disposition to be a great astronaut.”

This month, Lauren plans to return to Cape Canaveral for the April 15 launch of SpaceX, as Elon Musk’s spacecraft carries four astronauts to the International Space Station. “I think I’ll be even more excited this time. I’m emotionally invested.”

That’s because Jessica will be suited up inside. She will be celebrating her 34th birthday in the space station and is on course to be the first black woman to have an extended space station stay. Jessica also has been selected for the Artemis team – the astronauts who are helping Americans return to the moon in 2025. The actual crew going to the moon has not been selected yet, but President Joe Biden has said there will be a woman and a person of color on that mission.

In the meantime, the Artemis team will be back in Flagstaff this year. And yes, the friends will be reunited again, as Lauren helps prepare them for the rocks they might encounter at the lunar South Pole.

Is there power in a dream?

“A dream feels like a big far-away goal that’s going to be difficult to achieve and something that you might achieve much later in life,” said Jessica in a NASA video. “But in reality, what a dream realized is, is just putting one foot in front of the other on a daily basis. And if you put enough of those footprints together, eventually they become a path toward your dreams.”

Marc Guss would agree. And so would Walt Disney, who said, “Dreams come true if you have the courage to pursue them.” QCBN