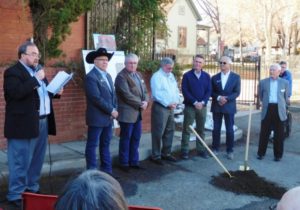 Ever-increasing visitation and recognition as a key destination in Central Arizona prompted leadership at Sharlot Hall Museum to accelerate plans for expansion of the education center.

Groundbreaking for the 10,000-square-foot addition to the existing John and Helen Lawless Exhibit Center had more than 75 museum supporters gather Feb. 28 for a spirited ceremony celebrating the success of the popular attraction.

Master of Ceremonies D.J. Fone described the soon-to-be constructed $2.75 million two-story (and a one-story basement) as being a “…further source of historical, literary, civic and educational interest in preserving the heritage of the central highlands of Arizona.”

Museum Director Fred Veil expressed thanks to those who contributed to the fundraising efforts. He explained that the additional facilities will support the current focus of developing museum exhibits. He noted that more school and group tours, hands-on activities and exhibits would be possible with the new space. Currently, the museum has thousands of objects, but capabilities to show only about 10 percent of them at any one time, said Ken Leja, the museum’s media and marketing manager.

More than 50,000 people visit the museum each year.

Veil then invited city and county dignitaries to join him to ceremoniously break ground.

When completed in about eight months, the Education Center will have an auditorium with theater-style seating for about 135 people. It also can serve as a multipurpose room to accommodate community activities. The second floor will have classrooms and other space equipped with contemporary technology. Prescott-based Kenson Construction is heading the construction.

It has been 90 years since Sharlot Hall Museum opened its doors. Founded in 1928 by Sharlot M. Hall, a writer, pioneer ranch owner, activist and historian, the museum has grown from a small parcel with a log cabin on bare land to a four-acre campus housing 11 exhibit buildings that contain more than 40,000 artifacts.

Upcoming events at the museum include the monthly Second Saturday Living History Adventures, the Folk Arts Fair in the first week of June, the Indian Art Market the second weekend of July, and Sharlot’s Winefest in August.

The museum is located at 415 W. Gurley Street in downtown Prescott. For more information, call 928-445-3122 or visit sharlot.org. QCBN