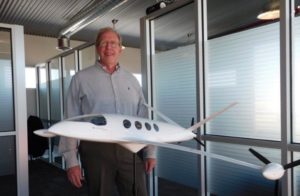 At some point this late summer or early fall, observers at and around Prescott Municipal Airport are likely to see a history-making flight.

Eviation Alice is scheduled to take off and soar above runways located at 5,045 feet above sea level.

The plane is a totally electric propelled aircraft that will have been assembled in Prescott, the U.S. headquarters and subsidiary for the Israeli-based global aircraft manufacturer, Eviation Aircraft Limited.

Leland Moreno-Hilburn, executive director and general manager for Eviation Aircraft Inc., Prescott, said the current plan is that immediately after the prototype aircraft is introduced at the Paris (France) Air Show this June, it and the sub-assemblies of two other aircraft will be shipped to Prescott. Once here, local engineers and aircraft specialists will assemble them for local flight testing. He estimates that as many as 20 highly skilled employees will be involved in the assembly/integration and flight test operations.

In the meantime, Moreno-Hilburn is aggressively pursuing relationships and partnerships with local, national and international organizations to complete the planning and infrastructure necessary to manufacture aircraft in Prescott.

Currently operating out of a 1,600-square-foot office adjacent to the airport on MacCurdy Drive, Moreno-Hilburn spends his days in electronic and telephonic contact with experts around the world to make sure all components are in place to assemble the flight test aircraft and eventually build the Eviation Alice once facilities are constructed. He and Eviation officials are currently evaluating sites at the airport where aircraft manufacturing could occur.

Omer Bar-Yohay, CEO and co-founder of Eviation Aircraft, whose office is in Kadima (near Tel Aviv) is a frequent visitor to the U.S. and Prescott. With a doctoral degree in physics and years of experience creating and advancing aviation technological advances, he helped pioneer the industry’s first all-electric regional transport aircraft, named “Alice.”

As presently designed, the nine-passenger, fully battery-powered plane will have a 650-mile, plus reserve range from a single charge, which will propel the three electric motors. The central thrust motor is at the rear of the plane. Smaller motors are on the 60-foot wingtips to provide stability. Power for the motors will come from lithium ion batteries in the fuselage. Those batteries amount to about 65 percent of Alice’s weight.

Many structural components of Alice will be created through the use of sophisticated 3-D printers, which will use precisely engineered materials. Other plane components will be supplied by vendors, some of which may choose to locate in Prescott, Moreno-Hilburn said.

Ultimately, two models of Alice likely will be manufactured. “The first model will be an unpressurized, nine-passenger plane designed to fly up to a 10,000-foot altitude at a cruise speed of 260 knots (299 miles mph),” he said. “The second model will be pressurized and carry six passengers at altitudes up to 30,000 feet. These aircraft will be perfect for commercial regional transportation. They will change the way people move regionally.

“Alice will be the perfect aircraft for commercial airline and on-demand charter operators for short-hop flights,” Hilburn-Moreno said. “For example, it will be an easy flight from here to Albuquerque and return. Or Las Vegas. Or Tucson. The same is true from those cities to other cities in their vicinity, or especially cities on the East and West Coast, where commuter airlines thrive.”

Emphasizing that Eviation Aircraft is a manufacturer, not an airline, Hilburn-Moreno said the market for the airplane is likely worldwide. “We’ve already had inquiries throughout several countries about when the planes will be ready for sale.”

Depending on the final equipment and amenities, the planes are said to be less than half the cost of a comparable-size conventionally powered aircraft.

An experienced aviation and aerospace engineer, Moreno-Hilburn also has an extensive background as a certified business analyst and project manager. The Seattle native was on the cutting edge in pioneering military and commercial aircraft design, manufacturing and administration of sales and services during his 30-year executive career with The Boeing Company.

While working on Boeing company projects in Mesa, he had planned to retire in Arizona.

“I was weary of the damp, grey Seattle climate,” he explained. “It didn’t take me long to figure out that Mesa was not the place to be in mid-summer.”

He eventually retired to Prescott Valley, where he lives with his wife, Rosa. “No regrets, for sure,” he said.

Moreno-Hilburn especially appreciates the friendly business-positive environment of Prescott and the surrounding area. “The mayor, Prescott City Council and city staff have been enthusiastically supportive, so have Chancellor Frank Ayers and the faculty and staff at Embry-Riddle. In fact, we’re blessed to have four solid higher education programs in the Quad Cities area – ERAU, Northern Arizona University, Prescott College and Yavapai College – that can provide us with bright young people who want to remain in the area to work. We’ll no longer export our local intellectual capital.”

He also says the recently designated Prescott Regional Airport is “…the perfect location for Eviation to manufacture and deliver its planes.

“Having Eviation select Prescott as its U.S. headquarters is an amazing coup for the community,” Robb said. “They could have gone anywhere, and they selected Prescott. I believe Eviation is a game-changer for regional air transportation. It will bring supply chain and other companies with leading edge technologies and create opportunities for research, innovation and incubation. Our entire area can be excited about this economic opportunity.” QCBN

`The airport was first used on July 4, 1926, and became a dedicated airport in August 1928, when it was named Ernest A. Love Field in honor of a Prescott pilot who died while flying in World War I. QCBN

Eviation Aircraft Inc.-Prescott Executive Director and General Manager Leland Moreno-Hilburn is an experienced aviation engineer and business analyst with 30 years’ experience with the Boeing Company. He is coordinating the Prescott start-up effort of Eviation Aircraft in the manufacturing of the industry’s first all-electric propelled regional transport aircraft.   (Photo by Ray Newton)