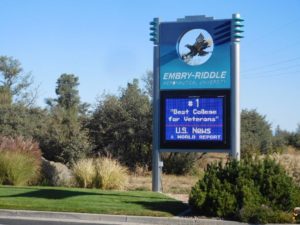 It ranked No.2 overall for Best Regional Colleges in the West.

Embry-Riddle Aeronautical University (ERAU) Chancellor Anette Karlsson shared plans for major expansion on the ERAU Prescott campus in coming years with the Board of Visitors during its fall meeting Sept. 29.

Karlsson said expansion proposals were prompted by the increasing enrollment on the Prescott campus. This fall, enrollment is approaching 3,200. In 2020, enrollment was 3,004; and in 2019, enrollment was 2,946. Those numbers include both undergraduate and graduate students.

It was noted the consistent high national ranking of the ERAU-Prescott campus by U.S. News & World Report created positive visibility and attraction for the campus. This past month, the magazine rated the Prescott campus as “No. 1 in the Nation Best College for Veterans.”

It ranked No.2 overall for Best Regional Colleges in the West.

College of Engineering Dean Ron Madler said growth in that college was such that a new aeronautical complex and a propulsion laboratory are under consideration.

Representatives from the Department of Flight note that 35 new aircraft have been added to the ERAU fleet in order to accommodate the increasing number of students training to become pilots. Approximately 900 students are taking pilot training.

The Golden Eagle Flight Team, which won its 13th national championship last spring, now has 27 active members and is looking to add a third aircraft to its competition fleet of Cessna 150s.

Steve Bobinsky, executive director of philanthropy, reported that five philanthropy councils had been formed, with local community members to assist the university by serving as ambassadors in creating public awareness of projects for which support was needed. More details about those councils are available through Bobinsky at bobinb97@erau.edu or by calling 928 777-4210. QCBN