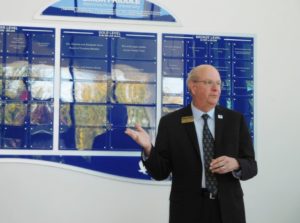 Embry-Riddle Aeronautical University’s (ERAU) Prescott campus has never been more upward bound, according to President Barry Butler. He reported on the “State of the University” when he visited campus in early October.

Butler, speaking before the ERAU-Prescott Board of Visitors and several administrative officials, emphasized that the university has never been in better shape – academically, financially and reputationally.

Named president in March 2017, Butler is the sixth person to lead ERAU’s multiple campuses. He holds degrees in aeronautical-astronautical and mechanical engineering. Butler emphasized ERAU’s international reputation as a leading science, technology, engineering and mathematics university. “This institution is the unquestioned higher education leader in aerospace education and select areas of research,” he said.

Butler, whose office is on the Daytona Beach campus of ERAU, praised Chancellor Frank Ayers and his administration and faculty at the Prescott campus for leading the way in identifying and recruiting top students.

It was noted that the Prescott campus enrollment was approaching 2,700 when the fall term began in August. That is about an eight percent increase over last year, and represents a growth of more than 1,000 students since 2012.

Overall, counting the cumulative enrollment at the Prescott, Daytona Beach and Worldwide campuses (which are scattered across 33 states and nine countries), current global enrollment numbers 31,000 students.

Earlier, Chancellor Ayers told the same group that financially, the Prescott campus was rock solid in its budget.

Ayers pointed out that in just three years, more than $70 million had been committed to new construction.

ERAU Students, Faculty Among Those Involved in 2017 Nobel Prize in Physics Research

Ayers made a special point of recognizing faculty and students who were among scientists and researchers who contributed to the Laser Interferometer Gravitational-Wave Observatory’s collaborative research.

He mentioned in particular two students, Marek Szczepanczyk and Kiranjyot Jasmine Gill, who were student co-authors of the paper about the historic discovery.

Gill was the only undergraduate involved in the LIGO research. She also was the youngest. She is a physics and particle physics major who plans to become an astronaut. She will receive her degree from ERAU. Currently, she is being recruited by universities around the world to enroll in their graduate programs.

Ayers said that Gill has been called “…the best student scientist in the world…” by world experts, including the three Nobel Prize in Physics winners who were recently announced.

Butler and Ayers concluded their State of the University comments by discussing future strategic themes for the institution.

Specifically, they cited those programs and curricula where the university will excel. Among them were those emphasizing aerospace, aeronautics, aviation, cybersecurity and intelligence, engineering, science, business, unmanned aerial systems, aviation safety and other related disciplines.

Ayers pointed out that 80 regional, national and international companies, corporations and governmental agencies had been on campus for a job fair.

“These recruiters are from some of the biggest organizations in the world – Microsoft, Amazon, Intel – and of course, major industries directly involved in aviation and aerospace. They want our students,” Ayers said. QCBN