You are here: Home / Community Profile / ERAU Chancellor Ranks Among ‘Most Influential Women in Arizona’ 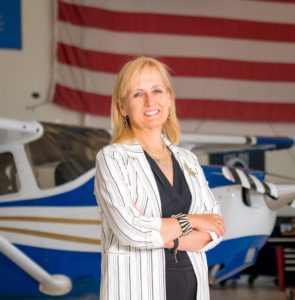 Anette Karlsson arrived in Prescott on Aug. 1, 2019, as chancellor of the Embry-Riddle Aeronautical University (ERAU) Prescott campus. She pledged a university education that was personal, student-focused and totally immersive. She also emphasized the continuation of rigorous learning experiences that had positive educational and economic impacts on Arizona and the nation.

Though barely known in Arizona when she arrived, a year later, she was named one of 2020’s “Most Influential Women in Arizona.”

However, because of the COVID-19 shutdown of public events, the celebration was delayed until this month in Phoenix.

This year marks the 10th anniversary of the prestigious event organized by AZ Business and AZRE magazines, both of which focus on high-level corporate, business and educational executives and owners. “Being named is a testament to the number of brilliant, talented women leaders in Arizona. The program is one of the most elite and competitive in the state, ” said AZ Big Media Editor in Chief Michael Gossie. More than 2,000 women were considered.

Karlsson, a native of Sweden, has achieved international prominence as an engineering and aviation expert, as well as a higher education administrator. Karlsson had a successful academic and work career in Sweden. She completed degrees in engineering – a bachelor’s in 1985 and a master’s in 1990 – at Linkoping University. During that same period, she worked for SAAB Corporation in the aerospace division.

She moved to the United States, where she served as a scientific attaché in the Swedish Embassy. Karlsson soon enrolled at Rutgers University, where she earned her doctorate in mechanical and aerospace engineering in 1999. She completed post-doctoral research experience at Princeton University. She later joined the University of Delaware faculty from 2008 to 2012, and became chair of the Department of Mechanical Engineering. In 2012, she moved to Cleveland State University as a professor and dean in the Washkewicz College of Engineering.

Karlsson accepted the administrative position at ERAU, succeeding Dr. Frank Ayers, who retired at ERAU-Prescott and moved to the ERAU-Daytona Beach, Florida, campus.

“She brought stellar academic credentials, superb executive experience, a passion for both engineering and aviation, and a team-oriented approach to the chancellorship,” said ERAU President Dr. P. Barry Butler.

As leader of what is rated the No. 1 aviation and aerospace university in the nation, Karlsson said, “Enrollment is expected to exceed 3,000 this fall, with students coming from all 50 states and from more than 40 foreign nations. The increase, though modest, is an exception to what is happening in the rest of the country. This speaks well of our dedicated faculty and staff, who consider students the reason why we have a university.”

The worldwide campus, including the other residential campus in Florida, brings the total enrollment to 31,000 for ERAU.

“Soon after I moved here, the pandemic began. We had to think about moving ahead with educational programs while at the same time keeping everyone safe during all these months. That derailed some of my plans.”

“Actually, aviation – graduating pilots. The aviation industry is coming back strong. Also, the airline industry is suffering from a shortage of pilots because so many are retiring. Cybersecurity is also increasing in enrollment.”

“The Golden Eagles flight team this past late May won its 13th national flight championship, competing against 28 major universities in the U.S. We’re really proud of those top-notch students.”

“We’re in the design phases of a new student union center. We desperately need it. That’s part of my long-term goal – to refresh the campus. Then, we’ll look at new classrooms and office buildings.”

“I really do enjoy rising early and getting out and jogging and exercising. But it seems lately, I’ve had to cut back on that because of so many other obligations. I get out on weekends.” QCBN