You are here: Home / Columnists / ERAU’s Golden Eagles Flight Team is Inducted into the International Air and Space Hall of Fame 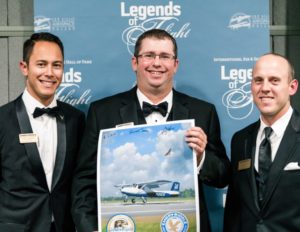 The Golden Eagles is the winningest intercollegiate flying team of the last two decades, including 30 consecutive regional championships and 11 national championships. The current team has 27 active members, four coaches and one advisor.

“This honor represents recognition of years of sacrifice and hard work,” said head coach Sam Morris. “Teams throughout the years have truly created a legacy that each team is expected to uphold or raise. It means that the current and future teams are setting out to do what their founders had desired and that they truly epitomize the creed they follow.”

To become a Golden Eagle, applicants are required to go through a six-week tryout period, during which they learn the basics of core ground events. In addition to taking weekly tests, applicants must go through a team-wide interview. Once the selection period is finished, the team trains several days a week as well as most weekends to train for competition, which culminates with more than 30 collegiate flight teams ultimately vying to become the National Intercollegiate Flying Association’s National Safety and Flight Evaluation Conference (NIFA SAFECON) national champions.

“The common saying during our practices is ‘give it your all, and then do a little bit more,’” said Ryan O’Connor, current Golden Eagles team member. “This mentality and the resulting tradition of excellence has been a common theme among every team member throughout the years.”

“What separates this team from other teams is that team members have a culture among themselves that perpetuates excellence and self-drive,” said head coach Sam Morris. “Within this culture, nothing but the best is expected out of each other and to feel such a drive from one’s peers is inferior to none.”

“This recognition from the San Diego Museum of Flight Hall of Fame clearly reflects the dedication and expertise of our Golden Eagles Flight Team members, but also reflects so positively on the commitment to excellence present across all disciplines at Embry-Riddle,” said Prescott Campus Chancellor Dr. Frank Ayers.