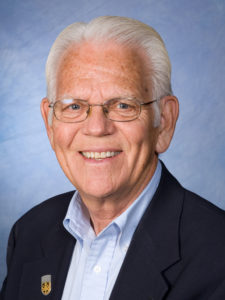 The death of former Northern Arizona University President Eugene M. Hughes does not diminish the legacy he leaves behind in the state.

Hughes filled that role for 14 years – from July 1, 1979, until June 30, 1993. During those years, the NAU campus grew dramatically in student population, faculty positions, and campus facilities. Its prestige increased, too, when Money Magazine in 1986 selected NAU as a public university that was successful in sustaining a flourishing liberal arts ambience that emphasized personal attention to students.

During his years as president, enrollment grew from 11,301 to 18,491. More than 20 buildings were constructed on campus. Several new academic projects were introduced, among them the Center for Excellence in Education, the Southwest Center for Forestry Science Complex in cooperation with the Forest Service; founding of the School of Hotel and Restaurant Management; and “New Momentum,” an academic program that involved Native Americans from throughout the Southwest and United States.

Notable expansion occurred when Hughes helped establish NAU field sites at several community colleges, including NAU-Yuma at Arizona Western College. Parallel to that was the creation of NAU-Net, a satellite and microwave network that allowed NAU to offer courses to off-campus sites. During the same era, Hughes and his colleagues initiated cooperative agreements with four universities in China so that NAU could expand its international presence.

Hughes was equally active in the community. He served on several boards of directors for organizations, including the Flagstaff Chamber of Commerce, Museum of Northern Arizona, East Flagstaff Rotary Club, Flagstaff Summer Festival and Boy Scout Council.

After leaving Flagstaff in June 1993, Hughes served as president of Wichita State University until 1999. He then was asked to serve as interim president at Eastern Kentucky University, a position he had from 2000 to 2001. He and his wife, Margaret Ann, returned to Flagstaff for permanent retirement in 2001. He immediately became active in the community again, including being president of the Museum of Northern Arizona and co-president of the Flagstaff Society of St. Vincent de Paul.

Hughes had earned three academic degrees: a bachelor’s of science degree in 1956 from Chadron State Teachers College (CSTC); a master’s degree in 1958 from Kansas State University; and a doctorate degree from George Peabody College-Vanderbilt University in 1968. He had three honorary doctorates: NAU, 1997; CSTC, 2003; and Eastern Kentucky University, 2011.

The Hughes family expects to announce a Celebration of Life event later this year. QCBN