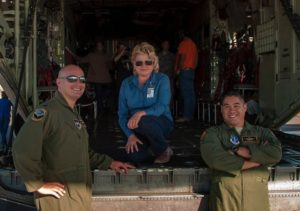 The best journeys do not necessarily have a flight plan. From growing up near an airfield to becoming a licensed commercial pilot to spearheading a fledgling air-traffic control school, Deborah Abingdon has vectored her distinct aviation experience toward a career in airport management. Plus, she has made the unlikely transition from one mile-high, mesa-top airport with a mile-long runway to another.

“As a young woman I read ‘West with the Night’ by [noted author/adventurer] Beryl Markham and that really inspired me because she liked horses, dogs and airplanes, like me,” explained Abingdon, who became Sedona Airport’s general manager in July. “She was kind of a heroine of mine.”

Abingdon started learning to fly in her 20s, but life and work got in the way. Two decades later, she returned to finish what she started near her alma mater – the University of Oregon – in Eugene. As she sat in Sedona Airport’s conference room, which is also the supply room for private jet crews, she explained that she never wanted to fly for a living. “It was always a personal goal. [The scenic Pacific Northwest] was a fabulous place to learn to fly.”

In search of a better climate after surviving a battle with cancer, she left the verdant coast for the high desert of central New Mexico’s Lincoln County nearly 13 years ago. She continued her flight training at Roswell International Air Center and now holds a Commercial Pilot License with Instrument Rating.

Looking to do something new professionally, Abingdon landed at Eastern New Mexico University – Roswell, teaching aviation basics at the school’s brand-new air traffic control (ATC) program. “I got hired two weeks before school started, with no curriculum, no materials, nothing. It was a real challenge,” explained Abingdon, who also holds Advanced Ground Instructor and Aircraft Dispatcher licenses. She taught full-time for eight rewarding years before changes in government hiring prompted the college to sign off from teaching ATC.

Needing a next step, she found a way to parlay her experience, stay in New Mexico and remain in aviation with the manager position at Belén Alexander Regional Airport in 2016. “I typically have pretty good timing,” she said. “I stepped into something really interesting.”

With state assistance, the airport had recently finished building a new mile-long runway to military specifications, paving the way to a joint use agreement with the Air Force. Located about 30 miles south of Albuquerque’s Kirtland Air Force Base, the upgraded mile-high Belén Airport suited the service branch with its nearby-but-rural environs and its unlit mesa-top airport. This combination makes it optimal for training C-130 transport aircraft pilots in short takeoff/landing and night-vision goggle training at a relatively quiet spot, away from Kirtland’s busy commercial airport neighbor – Albuquerque International Sunport – and without flying nearly 170 miles to Roswell.

“It saved them millions,” explained Abingdon, who called working with the Air Force a “great experience,” though it meant new coordination and policies for the small airport, including a requirement for radio communications and implementation of an air rescue and firefighting (ARFF) team.

Running Belén’s modest airport meant she had to wear many hats. “I’d have a day where I’d spend seven hours on the tractor mowing weeds in the dust, so I don’t really miss that,” Abingdon recalled, adding that her main legacy at Belén is the potential arrival of Vertical Limit Aviation, an Albuquerque-based flight school with international contracts.

If time allowed, she would go out and meet pilots as they gassed up at Belén Airport’s self-serve tanks. This was how she met two pilots from Sedona Airport about 18 months ago. “I thought, ‘I have family in Arizona now and that’s an area I’d consider relocating to,’” she recalled. “I knew it would be a nice area and so I was interested. It would allow me to grow as an airport manager in a little bit of a different environment and get me off the tractor!”

Abingdon replaced Amanda Shankland as general manager, who is now senior advisor in Public Policy and Government Affairs for the Greater Flagstaff Chamber of Commerce.

Abingdon does not see any unique challenges at Sedona Airport, with many mirroring the area’s ever-increasing popularity. “Expansion is not an option here,” she stated, with any capital improvements of flight facilities geared toward improving safety, efficiency, customer service and community considerations per Federal Aviation Administration (FAA) guidelines.

She says one of the reasons the intergovernmental Sedona-Oak Creek Airport Authority hired her is because of her diplomacy, citing “wonderful” relations with the city, Yavapai County, and the Sedona Chamber of Commerce. She also works closely with the airport’s “fantastic” and proactively eclectic board of directors.

Chef Mercer Mohr’s assumption of Mesa Grill’s operations has been very positive, added Nelson Durkee, the airport’s business manager. “They say they’ve turned the corner and been accepted as part of the Sedona vibe,” he noted, adding that they now cater for private air traffic, provide wedding services, while still offering affordable options at every meal.

Improvements to the overlook parking lot are planned for the coming months and determining the future of the vacant Masonic Lodge property is on the docket. “We’re working on a project to secure a better fire suppression plan for the mesa,” Abingdon said. “A lot of these initiatives have been on the books for a couple years now. I’m results driven. I have a good team and we’re going to try to get some of them done.”

Lingering concerns voiced by the community remain. “The noise complaints seem cyclical,” said Durkee. “[The air tour operators] are sticking to routes we’ve suggested they take. We don’t have near the volume of calls that we previously had. They are making the attempt to be better neighbors to our community.”

Guidance Air’s use of smaller, piston-driven Robinson helicopters aids with noise abatement. Military aircraft operations continue to add to noise concerns. Also of note is the airport’s push to limit unmanned aerial vehicle (drone) use on and around the mesa, with “drone-free zones” signs posted on trails, an online map of where they would like drone use to be limited, and an online notice page to inform the airport of nearby planned drone use. The FAA has established rules and registration mechanisms for drone use, but the airport’s desired limitations go beyond federal rules, somewhat controversially. The airport’s concerns are based on the vast interest in taking aerial photos and video of Sedona’s celebrated scenery, and their desire to avoid any airspace incursions and potential incidents between aircraft.

Abingdon is eager to continue engaging the community about noise abatement, drone awareness, and all other concerns. She is also excited about each fall’s Airport Day and its historic success in bringing people up to the mesa for a day of aviation-centered fun.

“We want to be a good neighbor. I like to think of myself as a goodwill ambassador for aviation,” she said. Her flight plan now includes this stop at the nicknamed ‘U.S.S. Sedona.’ She hopes to leave a significant positive legacy here, as she did in Belén. QCBN

Sedona Airport General Manager Deborah Abingdon brings a wealth of experience as a pilot and airport manager to the mile-high airport.