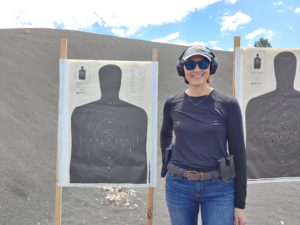 Arizona native Stacy Speed, a vice president in the banking industry, has been working from her home during the pandemic and has found time to take on a new hobby. “I wanted to do something for myself. I love learning,” she said. “Also, intuitively, I knew coming into this year, an election year, the timing was good for me to learn self-defense. I want to know how to protect myself.”

Speed has rarely picked up a gun before, but contacted Timberline Firearms and Training in Flagstaff, enrolled in classes, bought her first gun, a 9mm, then a second one, a shotgun, all in the last six months. Her purchases are among the millions of firearms sales across the country since March.

Data from the FBI’s National Instant Criminal Background Check System (NICS) show that after President Trump issued a proclamation on March 13, declaring a national emergency concerning the COVID-19 outbreak, firearms sales jumped to more than 120,000 per day, exceeding 700,000 firearms sold in March. The month of June saw the highest gun sales on record (since data collection began in 1998), with 3.9 million firearms sold.

“It’s an interesting climate,” said Jason Navarro, store manager for Tombstone Tactical in Chino Valley. “I haven’t seen anything like this. As soon as California announced COVID closures, 18-and-a-half inch barreled shotguns, home defense or tactical-style shotguns were the first things that went off the shelves. We were bought out almost immediately, followed by a run on AR-15 semi-automatic rifles. Inexpensive 9mm pistols were not too far behind.”

Amidst the health crisis, economic uncertainty and protests, gun shop owners say people who have never owned a gun before are driving sales. “First-time gun owners have been our largest new customer base,” said Rob Wilson, co-owner of Timberline Firearms and Training.

“Our overall business has really skyrocketed,” added Elise Wilson, Timberline co-owner. “People are taking their personal safety very seriously these days and, thankfully, they are seeking out training. Most of the people we’ve been seeing here recently are locals who have never been to Timberline before.”

“The more you hear about civil unrest and the movement to defund the police department, the more I’m seeing first-time firearms buyers and even liberal people buying guns who never thought they needed one before,” said Navarro. “They feel like they aren’t going to be protected without something in their home. They’ll come in and even say, ‘I’ve been anti-gun up until this point, but now that I’m seeing the news, I feel like I need some kind of protection.’”

Regina Pecoraro, director at Compass Training Center and leader of the Well Armed Woman chapter in Chino Valley, says the range has doubled the number of beginning pistol courses it teaches since the beginning of the year. “We do have a lot of new shooters in our pistol courses each month,” she said. “There wasn’t as much of a request for it as there is now. When COVID hit, more and more people started buying their first gun or getting their gun out of their safe, wanting to relearn how to use it.”

Those in the gun business say there is a noticeable increase in the number of women buying guns and taking lessons. Sports chiropractor Kym Wilkens, for example, did not grow up with guns and, in fact, had never touched one. But recently, that changed. “Over the last few years I’ve been spending more time camping and hiking by myself all day in the woods and just started thinking, ‘I wish I knew more about firearms. Maybe I want to own one.’”

She has been taking private lessons from Wilson. “I’m trying out different firearms and honing my skills. I will be purchasing one at some point.”

“Over the last six years, I’ve worked with thousands of women who have never even touched a gun before. And currently, I can’t keep up with the numbers of ladies who want to take a firearms safety class!” said Beth Alcazar, associate editor for the U.S. Concealed Carry Association’s (USCCA) Concealed Carry Magazine. “With many uncertainties happening in the world around us right now, rising numbers of women have determined that they should be as prepared as possible to protect themselves and those they love. No one wants to have limited options for self-defense or find themselves simply waiting and praying for help to come.”

“One thing I love is seeing folks like Stacy start here not knowing a thing about guns and then working on their skills, taking classes and having fun shooting and learning,” said Elise Wilson. “I love that part of the business.”

“I feel totally at home at the shooting range,” said Speed. “When I leave the classes, I feel so much more confident.” QCBN