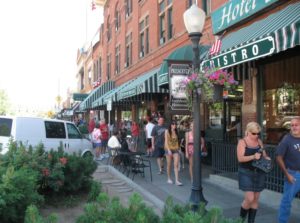 When “Flip This Town” author and podcaster Ron Drake explored Prescott, he was impressed by the friendliness of the people, the natural beauty of the area and the look and feel of the downtown. “I appreciate a community that’s doing well, but wants to be better,” he said. “I love a community that doesn’t want to get complacent.”

After three days in sessions with more than 100 locals – city leaders, business groups, investors and students – which included a stroll around the downtown and foot tours of historic buildings, he and Prescott residents saw things differently.

“The No. 1 take-away is there’s a lot that can be done pretty soon to bring more life to the downtown,” said Drake. “For example, the climate is amazing. The average temperature is 70 degrees year-round; yet, there wasn’t that much outdoor dining. San Diego probably has about the same outdoor temperature and there’s outdoor dining everywhere. When someone comes into town and sees people all over the sidewalks, when restaurants bring the inside outside to spill onto the streets, it’s much more attractive and friendly.”

The City of Prescott, Prescott Chamber of Commerce, Prescott Downtown Partnership and APS brought in the downtown revitalization expert to facilitate connections, problem-solve challenges and help create a workable plan for the future. Drake’s late-January visit fit with his mission to “Inspire-Equip-Restore the Heart of America, one downtown at a time.”

“Our downtown is a real gem, with tremendous potential,” said Prescott Mayor Greg Mengarelli. “There is a lot of momentum to bring more activity to the downtown area, beautification projects, improvements and diversity. We have to think differently.”

Drake helped the group think differently about old buildings. “So many of us have just focused on what’s on the ground floor of places downtown and we’ve never looked up,” said 22-year-old Arizona State University master’s student and Prescott native Haylie Smith in a recent podcast with Drake. “Now that we’ve seen those spaces, we’ve seen how valuable they are, how they could make incredible edgy downtown lofts. I honestly had never thought about what was above some of those establishments.”

Drake brings a message of “Practical Preservation” to cities like Prescott. “We oftentimes think preserving old buildings automatically means a lot of money. We’ve discovered practical ways to restore buildings. One of the cool side effects of some of our projects is letting the building be the design. For example, leave that plaster wall, leave the old wallpaper half on and half off, keep the original wood floors even if they are really rough, keep the open trusses. Expose it. Don’t feel like you have to hide the electrical, plumbing and duct work.”

He emphasized that people living in the downtown bring life, safety and money into the area. “It quite possibly is the most successful means to giving the heart of your community a healthy life. It creates vibrancy, especially after 5, after dark. There are lights on all over. It feels safer, it is safer, and there’s less trash because the sidewalk is the front porch. When you’ve got a community that is vibrant, you can just feel it.”

“I had no idea there was so much vacant space in these old buildings,” said Ponderosa Hotel Management Services Vice President of Marketing Margo Christensen. “It was eye-opening that we were missing the ‘live’ part of ‘live, work, play’ in the downtown and the focus on locals and the local experience.”

Drake says developers often give up on revitalizing older buildings because of the expense. “They can’t get it to pencil out. I’m getting these projects to pencil out all over the country. Part of the reason, the developers are trying to make them too nice. Instead of keeping original walls, floors and ceilings, they put in new trim and a fancy floor, and now you’re spending a lot money when today’s downtown tenant doesn’t want all that stuff.”

Smith, who commutes from Prescott to Tempe and also works for the City of Prescott, says she and her friends would love to live downtown. Drake asked if she would mind if urban living meant parking her car around the corner or walking up three flights of stairs with groceries.

“I would love it if I got to live downtown,” she said. “I absolutely love everything that you said: exposing the brick, the wood and keeping everything in there and not worrying about making it perfect. People our age, we don’t care if it’s perfect. We just want it to be affordable.”

“A lot of conversations were about the difference between designing for locals, not tourists,” said Drake. “It seems right now we are more geared toward the tourist, but I think today’s tourists are looking more for an authentic experience. They want to go to the local hangout, rather than feeling like a tourist in a community.”

He cited the John Hancock Barbershop as an example of the kind of downtown business that is geared toward locals and offers an experience. “The barber shop guys have nailed it. They’re doing great and actually expanding into a bigger space. By exposing the building, it looks and feels great in there. They’ve combined some modern ideas and the history of the building. It’ a place where the locals go, and a lot of young people.”

Attracting and retaining young people was a point that resonated with Smith. In the podcast conversation with Drake, she said, “Prescott does have quite a few job opportunities, but not a lot of career opportunities. Many people have to leave to start their career and come back later.”

She added that there is a lack of things for college-aged people to do and often wonders, “Where are all the young people hiding?” She called Prescott a college town but said activities for college students are on campus, not in town. “We don’t have activities that would draw young people here.”

Mengarelli said bringing Drake to town was “totally worth doing. It’s one of the best things we’ve done since I’ve been mayor. Ron brought a fresh look and new ideas. We can rally around the downtown and how to improve it.”

“There’s a lot we can do in the short term, without investing a lot of money,” said Christensen, a member of the steering committee tasked with moving concepts from the sessions forward.

Drake added, “The answers lie in your community. I just want to help you find them.” QCBN