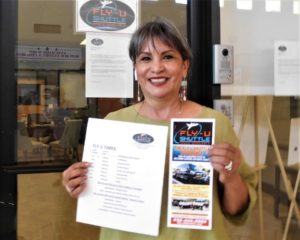 After several weeks of being closed as a non-essential service, Fly-U-Shuttle has reopened and is once again transporting passengers to and from Sky Harbor International Airport in Phoenix.

The locally owned and operated shuttle service also is conducting seasonal charter tours to locations such as the Grand Canyon, Sedona and other popular tourist destinations. Occasionally, charters are booked for trips to Las Vegas, or even destinations like Algodones, Mexico.

Charters also are available for weddings, special events and group or organization functions.

After being shut down for almost three months, owner Mima Bonnett says the shuttle service was back on the road June 18. “It was like starting all over again. We had to reintroduce ourselves to possible passengers from throughout Central and Northern Arizona. But, we feel good about our comeback and our passenger numbers continue to increase.”

Bonnett bought the transportation company in January 2019. In Prescott the past 15 years, she said she and her family wanted a local business that would help contribute to the greater community and yet provide them with a positive economic opportunity.

“Last year was great – until the pandemic started and caused the shutdown,” she said. “When we started, we had only two GMC vans, but quickly increased to four.”

All the vans are luxury-equipped, with individual reclining captain-style leather chairs, air conditioning and heating throughout, and large tinted windows to take in Arizona’s scenic views. Two of the vans seat up to eight people, while the other two hold up to six.

“We want to provide what amounts to an executive-style service to our passengers,” said Bonnett. “We will pick up and deliver to all local hotels. We also have a variety of other locations where we meet passengers. That includes locations en route, including Prescott Valley, Dewey, Mayer and Cordes Junction.”

Shuttles leave every three hours from Prescott to Phoenix, with the first one departing at 3 a.m., and the final one leaving at 9 p.m. Return trips leave as early as 5 a.m. and as late at 11 p.m. Currently, drivers and passengers wear face masks. Following each trip, vans are disinfected and sanitized. QCBN

The Fly-U-Shuttle office is located at 3250 Gateway Blvd., # 252, inside the Prescott Gateway Mall. Though closed at this time to on-site customers, the office can be reached by calling 928-445-8880. Reservations also can be made online at FlyUShuttle.com.