You are here: Home / Spotlight / Focusing on Wellness 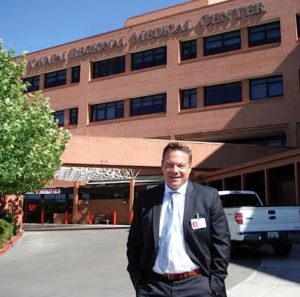 It is only natural that John Amos was chosen to head Yavapai Regional Medical Center. He has been locally grown right along with the community and the hospital for the past 21 years. Amos was chosen three years ago as president and CEO of the medical center, replacing a retiring Tim Barnett who oversaw the beginnings of the explosive growth of the area and the hospital.

Amos is no stranger to the medical center. He started there in the occupational therapy department and worked his way up in 1992 as director of rehabilitation services and then to COO of the east campus, which he helped develop.

He said he believes his experience through the last two-plus decades allows him an important perspective of how the whole staff feels when making decisions.

They must be doing something right. The hospital has earned several awards in the last few years, including being chosen as one of 10 hospitals in the entire nation for safe surgeries by ConsumerReports.com.

From the perspective of the hospital’s staff, Amos has continued the organization’s forward momentum, partly because he was a known commodity.

“He is the embodiment of our mission and visions of values, which are the cornerstone of our organization,” said Mark Timm, executive director of human resources. “He is a clinician himself, which adds to the ability to lead.”

As the hospital continues to grow, Amos predicts it will focus on wellness and health.

“It is historical healthcare to focus on disease management,” he said. “People get sick, we do a great job in managing that aspect of health management, but we want to keep folks healthy.”

He said there are programs that help diabetic patients through education and access through primary care and education. Also available is proactive education for patients who suffer heart failure. And, in line for growth are the breast health and neurosurgery departments.

“Telemedicine is available so you can connect individuals with their primary care physician or with a specialist in remote areas,” he said.

This is particularly important in remote areas of Northern Arizona, as doctors can readily consult with their patients.

Amos graduated in 1989 from Colorado State College in Fort Collins and earned his master’s degree in business at Northern Arizona University. Before coming to YRMC, he was employed by a national physical therapy company.

Amos, 52, said he picked the healthcare field because he enjoyed working with people.

“I was always fascinated with sports medicine, which drove me to pursue occupational therapy,” he said.

“I started in high school enjoying some of the physical and anatomy courses.”

That led to his advanced education interests.

He was married right out of college and the couple wanted to go somewhere different. They moved to Vero Beach, Florida, where they stayed for three years.

“It wasn’t home for us. We wanted to come back West. We liked Northern Arizona and were looking into that when we found Prescott.”

He says he hopes to see the hospital continue to grow and add services including enhancing the nuero surgery programs and the breast care center.

“The people are the greatest part of the job: our team, the physicians, volunteers and patients. I meet incredible people.” He enjoys hearing about their lives. For example, recently he met a World War II aviation electrician who flew on B-52s and sometimes repaired them in the air.

The Amos family is loves the outdoors. The children enjoy high school sports while the adults coach. They enjoy camping, bike riding and spending lazy hours on Lake Powell.

Who had the biggest influence on your life and why?

“My father. He is just incredible. He instilled the work ethic. He always had a genuine interest in helping support people. He is a good man.”

What is the best advice you have ever received?

“My grandmother said to be generous. I think about that and apply it in different ways. Be generous with our time. Be present when people need you, in my career and with my family.”

What is the most important character trait you look for in people who work with you?

“Lake Powell and anywhere in the San Juan Mountains in Southern Colorado.”

Who would you pick to play you when the movie comes out?

“Will Ferrell, because he is hilarious. He makes you laugh and I like to do that.”