You are here: Home / Business / Food Trucks Ready for Business to Rev Up 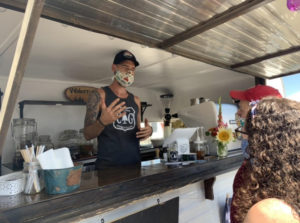 Priscillah Finney loaded her white 2009 Chevy Express cargo van and called it a day. Except her workday didn’t actually officially start on this recent Friday near downtown Prescott.

Instead, heavy dust and wind gusts smashed up her 10-foot by 10-foot white tent she uses to serve samosas – a fried food from her native Kenya.

She wiped sweat from her brow as another food vendor told her the local event was just canceled because of hot, dusty weather.

Finney, 61, said she lost $1,400 with a damaged tent coupled with not being able to set up shop at the live music event in the local Best Western parking lot. But, the Nairobi native and owner of Safari Samosas doesn’t have time to sulk.

Finney knows the missed day of work can prove costly. She said she hasn’t paid a mortgage payment since January and struggles to pay her regular car payment. In March, her business took a significant hit with big summer events canceling because of the pandemic.

“I’m in a bad, bad situation because of this COVID thing,” Finney said. “I was thinking my house was going to go bye-bye.”

Fellow food vendor Jason Kinnear and owner of Stack’d has also had his fair share of problems since the pandemic hit.

His food trailer was forced to close a few weeks after its grand opening in February because of COVID-19. He sells New Mexican food out of a trailer he says is more suited for catered events.

“[The pandemic] was definitely not on my radar when I opened,” Kinnear said.

Every Wednesday, Kinnear parks his trailer at the Prescott Food Park, an outdoor food court in a dirt lot anchored by a few other food vendors near Goodwin and Montezuma streets.

He said there isn’t as much foot traffic since the bars closed down on Whiskey Row. He said Phoenix tourists don’t often cross to the southeast side of Montezuma, the food court’s location.

Kinnear said he was given permission to use recipes of the former owners of Kokopelii’s restaurant on Miller Valley Road in Prescott. Kokopelli’s since closed and currently houses Arturo’s Mexican Restaurant. His business has taken a significant hit from the cancelation of large events such as the Whiskey Row Marathon and the Fourth of July Parade.

“That’s pretty much what I’ve been doing, is try to keep my head up and keep going,” Kinnear said, “but it doesn’t look too hopeful.”

The Stack’d owner said he wants to get back into catering jobs but catering “is just not happening” right now. He said his business is “barely” staying afloat.

“I’m racking my brain daily,” Kinnear said. “I don’t want to hang up my tongs six months after opening.”

Joe Dueck, owner of Camp Grounds Tea and Coffee, has found success as an independent business owner. He and his wife, Lanna, moved to the area with their two boys after traveling the country for four years. Dueck said the couple wanted to create a sense of community with their start-up and he attributes the popularity of the coffee to using a local roaster and better-than-average brewing equipment as keys to his success. He said the syrups are also made from scratch; nothing is pre-packaged.

“You are getting straight-up natural ingredients,” Dueck said.

The business owner said the pandemic has had little effect on his business. On a recent Saturday, he said he saw hundreds of customers during a four-and-a-half hour period at the Prescott Farmer’s Market. He said his following is “excited” to see his trailer out in public spaces.

“The only way [the pandemic] has affected us is the lack of tourism and having some big events canceled,” Dueck said.

Finney, meanwhile, looks forward to better times ahead. She hopes she can grow her customer base and climb out of debt. One day, she thinks she will realize her dream of owning her own food truck so she can have more room for the freezers and coolers she uses to store her food.

“I think things are going to get better,” she said. QCBN