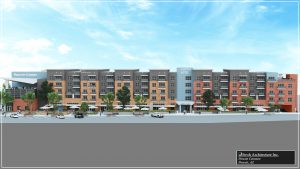 The existing structure, built in 1962, will be demolished.

The winning bid of $2.5 million submitted by Stroh Architecture won that firm the right to buy the land and submit a redevelopment plan that proposes a five-story building with a restaurant, hotel and apartment space.

The firm was selected unanimously by the Prescott City Council Tuesday, Oct. 18.

Since then, Principal Architect Douglas Stroh and company representatives have met several times with city officials and other parties for discussions about how the redevelopment will be planned and implemented.

Located on prime property in downtown Prescott at the corner of Cortez and Goodwin Street, the 1.3-acre parcel is designed to contain a 20,000-square-foot hotel with 100 hotel suites and 50 apartment units on the top two floors. The proposal also includes some underground parking. Stroh said he hopes to integrate into the new design the existing historic rearing horse and cowboy statue that currently is showcased in front of the former City Hall building.

The existing structure, built in 1962, will be demolished.

Prescott City Councilmember Eric Moore commented that the recently sold City Hall building was not able to meet the demands of the community and he agrees with the proposal to redevelop the site to meet existing and urgent needs.

Stroh told Quad Cities Business News that his public relations representative Danielle Feroleto, founder-owner of Small Giants, handled many of the inquiries he was receiving about the redevelopment proposal. The architecture firm and associates are considering how the proposed redevelopment could best reflect the frontier and territorial tradition of Prescott.

The project is expected to be reviewed by the Prescott Preservation Commission after the first of the year. In the meantime, the project development team is putting together a website that will provide updates to the public.