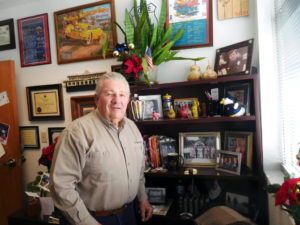 The coming weeks and months will be demanding and intense, says Yavapai County Board of Supervisors Chair Craig Brown. Requests continue to come in for more services and facilities. That, he says, coupled with what looks to be an aggressive political year, will heat up the governmental landscape.

“The major issue we supervisors will face in the next month is looking toward the estimated $70 million bond issue to pay for a new jail in Prescott. Some have said we need to spend more, but I am insistent that amount will cover the costs.”

The board has been preparing for the construction of a 144-bed jail just south of the Prescott Lakes Parkway near the Yavapai County Juvenile Detention Center.

“We desperately need that jail to take the pressure off the existing jail in the Verde Valley near Camp Verde. That jail has about 550 people a day in it. What’s worse, about 65 percent of those prisoners are in trials in Prescott, so we – the county – have to transport them back and forth at a cost of about a million dollars a month. Think of the money we can save if we have them in a prison in the city where they are going to be tried,” he explained.  “We’ll be making some final decisions this coming month.”

If approved by voters, a bond to cover the cost of the new jail will be paid off through a combination of property taxes, jail sales tax revenue and the general fund.

Another major issue the board will be addressing is the matter of water shortages, not just in Yavapai County but throughout Arizona. “What most people don’t realize is that we really don’t have much say about water allocations, especially with private owners,” he said. “What is needed is for state legislators, in cooperation with federal authorities, to face up to reality and develop new water management plans and strategies. We have too many independent straws in the ground sucking water, but we at the county level cannot control that.”

Annexation is another matter Brown discussed. “Somewhat like the water issue, how land is annexed from the county into a city or town is not something we have absolute authority over. The reality is, the county cannot say no to annexation. Legal cause has to be demonstrated before it can be denied.”

With county growth, Brown says public safety and improved roads will get a lot of the board’s attention this year, too.

Brown is serving his second term as a county supervisor. He was first elected in 2012 and served as board chair in 2016. Already, he has declared he will run for a third term in 2020.

A resident of Yavapai County since 2005, Brown and his wife, Sandi, live In Williamson Valley’s Inscription Canyon, northwest of Prescott. That makes him the elected supervisor for District 4, which stretches to the county border north and west.

The Browns’ adult children – two sons and a daughter – and their families live in California and Texas.

Brown began his career with the Santa Monica Police Department. He was a detective for seven of his 15 years there, and rose to rank of sergeant. During the same period, he attended Redlands University where he earned degrees in administration of justice and public administration. Injuries forced him to retire in 1985.

Almost immediately, Brown was hired by the Superior Court system of Los Angeles and then, later, by the Los Angeles County Probation Department as a director. He used his organizational and administrative skills to manage a $300 million annual budget and oversee some 6,500 employees.

Before working in law enforcement, Brown was in the U.S. Army. He served in Vietnam with the Green Berets along the Cambodian border and earned several citations for his service before he was honorably discharged.

“No doubt about that, the Fourth of July. I love everything that day stands for.”

What is your favorite meal?

“The same thing I’d eat on the Fourth of July – fried chicken and mashed potatoes.”

What’s your favorite kind of entertainment?

“I love slapstick comedy – Laurel and Hardy and stuff like that. But I also like good Western movies or historic dramas and books. I’m kind of a history nut.”

If you had unlimited money to contribute, where would you direct it?

“Locally. Sharlot Hall Museum would get a chunk of it because of all the great preservation of our local Western history. I’d also give a bunch to veteran’s causes, for they have served our country. And certainly, I’d give to the Make-a-Wish Foundation. What it does for terminally ill children is remarkable.”

What music would we find on your playlist?