You are here: Home / Columnists / Getting to Know Tom Liuzzo with Granite Basin Engineering 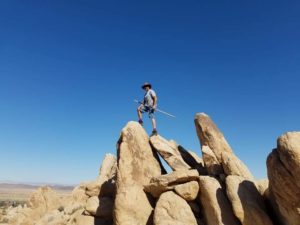 Welcome to “At Home With Tom and Sandy.” Sit back, relax and enjoy. As you know, Tom and I have been sharing our column on a monthly basis with the community for several years now and what fun it has been. Starting three months ago and continuing forward for a few more publications, Tom and I have been introducing you to our community/industry partners so you can get to know them better. Our first month, you met Steve Simpson of Blue Line Designs, then we introduced you to Jim Reed of Reed Brothers Construction, and last month, you met Christie Board, our local certified kitchen and bath designer with Board By Board Design. This month, say hi to Tom Liuzzo, a registered land surveyor for Granite Basin Engineering.

How long have you been a land surveyor?

I have been active in the survey and engineering industry since 1988. I am licensed in both Arizona and Nevada and in addition to my background as a land surveyor, I have been involved with numerous public utility and infrastructure improvement projects throughout the state as a part of planning and design teams. I have an understanding of all aspects of improvement projects, including funding, planning, design, construction and administration. I have personally managed construction projects that have been valued more than $10 million as well as been principal surveyor on projects valued in excess of $100 million. The team at Granite Basin has been in place for 14 years.

Tell us about the services, products you and Granite Basin Engineering provide.

We are a full-service civil engineering and land survey firm that provides field survey, construction documents and layout services for public works, residential and commercial projects.

Are you an early bird or a night owl?

Early bird all the way – before the sun comes up.

Who has influenced you most when it comes to how you approach your work?

Early on in my career, it was my first survey party chief. He showed me the important role that surveyors play in a field that is spearheaded by architects and engineers. My recent influences are my team at Granite Basin. We have been together for so long that we are like that excitingly dysfunctional family that always gets the job done.

What skill or personality trait do you most attribute to your success?

I listen to my clients; however, I am that pain-in-the-neck person that will ask you a hundred more questions about what you really want our services to do for you. In the end, both the client and I have a solid understanding of what the next steps are. I am also a good problem solver. As you know with construction in our region, you never know what we are going to dig up, so being able to fit things together in the field on the fly is a good skill to have.

How do you prefer to start your day?

I like to mix it up. Of course, this is all before the current state of affairs. Some days, I get to the office early and get the field crews out the door. Other days, I like to tour the dozen or so construction sites that we have active in the area before getting to the office. Once in a while, I would grab breakfast with an older friend of mine who is retired. I tap him for wisdom on whatever I feel needs his input. We always flip for breakfast.

What was your first job?

I had a job bagging clams for a dollar an hour.

What’s the worst job you’ve ever had, and what did you learn from it?

I used to operate a few sewer treatment plants. The systems were pressure systems, so each house had a grinder pump. I was their Maytag repairman and I would get the call to fix these systems at all hours. I learned two lessons at this point of my career. The first is that one of the treatment plants was my hometown where I lived. Once people found that out, they called my house for help before calling the treatment plant. The second thing is that grinder pumps don’t care for latex (if you know what I mean). No matter what you would flush, the latex pieces would get stuck in the pressure sensors. When I would show up to fix them and the resident would ask what was wrong I would explain it to them, but no one in the house would admit to using anything with latex so they had no idea how that got there.

What’s a mistake you made early on in your career, and what did you learn from it?

Where do I start? It’s not what mistake but how many. I used to get really upset with mistakes, but as I got older I realized mistakes help us learn about things we didn’t know we needed to learn. Mistakes can be healthy and need to be embraced whenever possible. In 1999, I was working on a portion of the new Fain Road or 89A. I had to match a point from another engineering firm on the end of the road section I was working on. I put that position in the computer, began developing the roadway corridor for topographic surveys and parcel description for acquisition of the right of way. At that time, I didn’t realize the issue we have at this elevation with grid and ground scale factors. Arizona State Plane values are large numbers (1.2 million by 500K) and when a value is scaled from the grid to the ground you can’t tell the difference with the naked eye unless you physically look at it on the ground. Not knowing this, I pushed forward with my work for months. Everything looked great on the computer. I finally went into the field with my trusty GPS gear, staked out the match point on the ground and it missed where it was intended to be by three-quarters of a mile. I subsequently passed out from fear! When I came to, I spent the next week burning the midnight oil fixing what I had done and learning how I did it and how not to do it again. That would have been a wild road to travel with a three-quarter mile connection miss!

What led you to this career?
AutoCAD. In 1988 in Northeast Pennsylvania, I was finishing up an associate’s degree in mechanical engineering from Penn State. I met an alumnus who owned a civil engineering firm and he let me know if there was anything I needed to just reach out to him. My final project was designing a stronger shifter for my Mustang GT that broke off in my hand while I was drag racing, legally. I needed a blueprint and I reached out to the alum and he was more than happy to have me come by the office in Scranton (no, not Dunder Mifflin) and get the blueprint made. He looked at it and asked how I drew it and I replied, “AutoCAD.” He showed me a new cubicle that they had built and in it was an IBM 286 computer with a large digitizing tablet. He asked if I could run it. I said yes, and 32 years later, I am still rocking and rolling.

What’s a work-related accomplishment that you’re really proud of?

I was taught to survey at the age of 20 by a guy who didn’t have to teach me but did it anyway. He was my mentor and is still my friend to this day. My accomplishment is that since I became licensed in 1999, I have mentored and helped 12 surveyors obtain their license. I will always pay that forward.

If you could snap your fingers and become an expert in something, what would it be?

Ah, I have two things: Geographic Information Systems (GIS) and drones. GIS because I know enough to be dangerous and I like to be self-sufficient with my software abilities. GIS software is not something that I use every day. Drones because they are most likely the next evolution just like GPS was 30 years ago. In the wrong hands, GPS is dangerous and so are drones. There is a large gap between how a drone gathers data and the end user. It is essentially a video game that apples to life. I see many game players who didn’t realize they just failed and didn’t know they should hit the reset button.

What’s one thing most people don’t know about you?

When I was in high school, I was a pretty good athlete and my senior year I beat the future NFL standout Raghib (“Rocket”) Ismail in the finals for the 110 High Hurdles at the Pennsylvania District II Track and Field Championships.

What’s the best advice you were ever given?
When I worked for Sunrise Engineering in the mid- to late- 90s, the president of the company, Alden Robinson, told me that I should learn to train my replacement. That way, as I advance in my career, I have a legacy that can be built upon.

If you could trade places with anyone for a day, who would you choose?

My wife, she makes being a lunch lady super cool and she gets joy from helping the kids. Plus, she is married to me! LOL!

If you had to pick one age to be permanently, which age would you choose?

What three words would your friends use to describe you?

What would we most likely find you doing on the weekend?

Riding my Harley alongside my wife on her Harley if we are not in Joshua Tree.

Do you have a hidden talent?

I am an amazing cook. I grew up in an Italian restaurant and I was a carnie for 17 years as a food vendor.

If you could choose a superpower, what would it be?

What’s your favorite sport and team?

Football and the new Las Vegas Raiders. I have been a Raiders fan my entire life.

What is the one item you can’t leave home without?

What’s one item you want to own that you don’t?

A mustang GT once again.

What’s your favorite place to eat in town?

How do you spend your free time?

No matter what the politicians try to do to mess it up, it is resilient and always recovers.

As Tom and I have said previously, we are extremely fortunate to have folks like Tom Liuzzo in the community and the neighborhood. You can meet Tom at granitebasinengineering.com or 928-899-2947.

A big thanks to you, Tom, for stopping in to visit “At Home With Tom and Sandy.” To our readers, we will see you next month with another superstar in the industry. QCBN