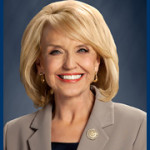 Governor Jan Brewer says she is supporting the future of Arizona by vetoing SB1062.  Brewer says she spent the day meeting with people on both sides of the issue and decided the legislation was not in the best interest of Arizona.

(Below are comments from lawmakers on the governor’s decision.)

“I appreciate the decision made by Governor Brewer to veto this legislation. I hope that we can now move on from this controversy and assure the American people that everyone is welcome to live, work and enjoy our beautiful State of Arizona.”

“Once again Arizona has been in the headlines for the wrong reasons,” said Sen. Tovar.

“SB 1062 permits discrimination under the guise of religious freedom. With the express consent of Republicans in this Legislature, many Arizonans would have found themselves members of a separate and unequal class under this law because of their sexual orientation.

“It tarnished our image, nationally and around the world, and hurt our economy.

“A major convention has been cancelled, tourism dollars have been lost, and business leaders say that companies are reconsidering whether to bring thousands of jobs to Arizona.

“Worst of all, LGBT Arizonans have been made to feel that, in the state they call home, the belief that all people are created equal may not apply to them in the eyes of certain elected officials.

“We are glad that Governor Brewer vetoed this devastating bill that would have marginalized members of our LGBT community and others.

“We want the nation and the world to know that SB 1062, a mean-spirited effort to legally sanction discrimination, is not representative of our state.

“Arizonans expect us to be working on the things that matter to them, like improving education, fixing CPS, creating jobs and growing the economy.

“It’s time to move Arizona forward and make sure something like SB1062 never happens again. It’s time to show the nation and the world what Arizona is really about.”

“I join Arizonans across our great state in thanking Governor Brewer for vetoing SB1062. Arizona dearly needed this responsible leadership after suffering so much at the hands of our Legislature. I hope her veto will shield Arizona from further damage, but we aren’t out of the woods yet. The lawmakers who rammed this bill through our Legislature owe Arizona an apology and an explanation of why and how they rushed it without input from citizens, the business community and tourism bureaus. We need answers so we can ensure this never happens again. Arizona deserves better.”