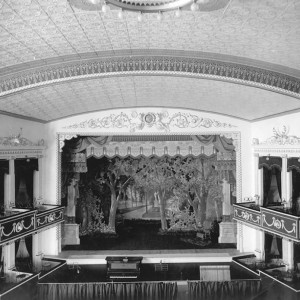 When country-singing impersonator Corrie Sachas, a Reba McEntire look-a-like, sound-a-like performer from Las Vegas, takes the stage at the Elks Opera House, she feels the rich legacy and tradition of the 111-year-old building.

“I think to myself, people I admire have performed here. I touch the walls and am honored to be able to perform in such a lovely place full of history.”

It is that respect for America’s past that has kept the building’s spirit and structure intact in downtown Prescott.

In the early 1900s, Prescott was a prominent stop between the larger cities to the east and west. In 1904, the Prescott Lodge of the Benevolent and Protective Order of the Elks (BPOE) decided the territory needed a world-class opera house. The location of the opera house – one block east of the Yavapai County Courthouse Plaza and along the streetcar route – was ideal for locals and travelers.

On April 3, 1904, in front of a large crowd, the first cornerstone was set in place. Few expenses were spared in the design and construction – private boxes, extravagant ceilings, plush fabrics, gold-leaf columns, stenciled decor, plaster elk heads and a unique stage backdrop. The venue had 900 seats and eight dressing rooms, and the acoustics were considered “superb.”

Less than a year later, on Feb. 20, 1905, the Elks Opera House opened with the play Marta of the Lowlands, starring Florence Roberts. The orchestra was composed of musicians from Prescott, Jerome and Phoenix. Opera boxes sold for $20 and general admission was $2.50. The box office proceeds totaled $1,225, leaving about $600 net profit for the Elks Lodge.

During those early years, acclaimed performers such as Sir Harry Lauder and John Phillip Sousa were among the many celebrities who appeared at the Elks. Tom Mix and Tony the Wonder Horse were regular performers at the theater. In the 1940s, the opera boxes and ornamental finishes were removed to accommodate wide-screen movies.

In 1968, the BPOE sold the building, including the theater, to a group of local businessmen who ran the theater and continued to make modern changes to the venue. In 1982 the opera house was listed on the National Register of Historic Places and was purchased by the Arizona Community Foundation.

In 2001, the City of Prescott, at a cost of $250,000, purchased the opera house in an effort to preserve the historic landmark and ensure its continued use as a community gathering place. A group of Prescott citizens soon organized the Elks Opera House Foundation, a non-profit, tax-exempt corporation aimed at preserving and restoring the opera house.

Through the years, the theater has seen a number of renovations, transformations and changes that were considered improvements. For many years, modernization was the goal. However, since the 1980s preservation and restoration became the focus, and the building benefited from many grant-funded structural repairs and equipment upgrades.

“Fortunately, the majority of the so-called upgrades that took place after 1905 only covered the original architecture, rather than destroying it,” explained Colette Greenlee business manager of the Elks Theatre and Performing Arts Center. “Many embellishments were destroyed in the name of progress; yet, many things were preserved, we just had to uncover them and replace them. And most of the infrastructure such as plumbing, electrical and such has to be completely replaced.”

On Friday, Dec. 9, 2006, Bill, the elk, made of copper that originally stood atop the building, was returned to its rightful place, following a much-needed restoration. Bill had been removed from the building in 1971 when the BPOE moved to a new building in Prescott Valley.

A big push to restore the theater came in late 2009 with a $1.25 million grant from the Harold James Family Trust. According to Greenlee, the goal was to restore the theater to its 1905 grandeur. “Prescott residents and the city are very passionate about keeping the historical elements that make Prescott so unique.”

The first step was to remove the various structures that had been added over the years. The opera boxes were rebuilt, the concession stand was refinished, embellishments were reproduced, replicas were made and state-of-the-art technology, such as a sound system, was integrated. The final cost was nearly $1.75 million.

The non-profit Elks Theatre and Performing Arts Center invested $1.8 million to restore the deteriorating brick exterior, which was completed in 2014. Additionally, the organization established an endowment fund to provide funds for the ongoing maintenance and operational costs of the theater.

The restoration work continues, with a focus on maintaining as much as the original structure and pieces of the past. The estimated $3.8 million project, scheduled to be complete in June, encompasses all three floors of the building:

“We are doing everything we can to restore and maintain the history, the look and the authenticity of the original opera house and building,” said Greenlee. “As a matter of fact, the theater is one of two theaters in Arizona that still use hemp [rope] rigging and sandbags for the stage curtains, which must be opened and closed by hand.”

Today, the theater is reminiscent of 1905, with a few exceptions such as heating and cooling and modern washroom facilities. Show goers can purchase snacks and drinks, including beer and wine, enjoy the show from the up-close floor seats or get a higher view from the balcony. For those who truly want an opera experience, private box seats are positioned on either side of the stage.

More than 30 dedicated volunteers and three paid employees embrace the traditions, culture and style of the past to welcome today’s show-goers. They say they love to share the story of the “Elks Opera House” and are committed to making the experience for each guest a memorable one. Free theater tours are offered from 10 a.m. to 2 p.m., Tuesday through Friday. For more information on the theater and upcoming events, visit PrescottElksTheater.com.